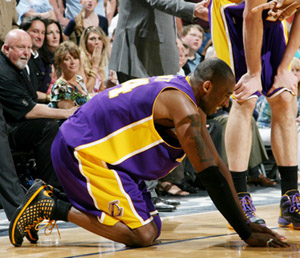 A series doesn’t start until the home team loses a game.

This edict has been offered up for many years and at some level, it holds some merit.  That unexpected first-round series between Boston and Atlanta was a perfect example of a series basically just coming down to Game 7, because the other six were deemed moot with home victories.  The Utah Jazz have had one of the staunchest home records for years and despite their issues with Houston, they reside in one of the most feared and daunting arenas in the league.  For this reason, the 2-0 lead enjoyed by the Los Angeles Lakers was much like the one the Hornets had before this weekend, tenuous at best.

Xerox wants some royalties from this LA/Utah second-round series.  To this point, all four of the games have seemed eerily familiar.  Not only in just the locations and results, but also in how the action and flow of the games has played out.  Just three days ago, the Lakers were up 2-0, still hadn’t dropped a game in the postseason but with the impending trip to Utah, it couldn’t be a given that they would soon be stamping their ticket for the conference finals.  Now with the series knotted at two games a piece–after the Jazz held serve with a weekend deuce back in the SLC–the situation should be borderline drastic around the Staples Center.

Yesterday, the man known as Kobe Bryant almost looked like the post-Shaq/pre-Pau player that was universally condemned for not being a team-first guy.  Yesterday’s performance in Game 4 not only calls this knock to mind, but also illustrates just how he strayed from the beautiful, patient game he has played all season long.  Kobe came out firing from the start (including a really bad shot in the game’s first minute) where as the past had seen him look predominately for his teammates and for himself later in the game.  Kobe did have some good associated numbers (I hate when a guy is deemed to have a bad night, just because he didn’t shoot well), but whenever you have as many shot attempts as you do points (33), you have dominated the ball in a negative way.  Lamar Odom seemed to be in the right place all night long and despite his continued poor shooting from the foul line, he should have been more assertive or included in the extra time.  His only shot attempt was a high-percentage dunk and he just never seemed to keep his individual momentum coming in after regulation.  Kobe managed 8 shots in overtime, if that matters.

Throw in the obvious bad back issue and there must be serious concern on the part of Laker fans.  (I sat out my entire senior season in college with back spasms; Kobe’s health must not be underestimated.  When I was feeling good, there were no problems, the best ball of my life; but when the back acted up, basic things on the court were borderline impossible.)  A few too many of those late game drives and shots from Game 4 were obviously hindered by Kobe’s ailing back.  If this injury rears its ugly head again at any point during the remainder of the series, the Lakers WILL be in trouble.

Back to that photo-copying analogy.  Games 1 and 2 were largely dominated by the home team (LA) but each game was still up for grabs in the game’s final minutes (in the NBA, if you are within 15 with 5 left, you are still in the game.)  Both games were won in similar fashion with the home side holding off a 4th-quarter rally to win with relative ease.  Games 3 and 4 were basically the same, with yesterday’s Game 4, a bit closer due to some great late-game shooting from Lakers’ guard, Derek Fisher and some poor late game defensive rebounding by Utah. (SIDE NOTE: the booing of Fisher by the Jazz fans is downright despicable.  I expect more from a sophisticated fan base like the one that exists in the SLC, but then again, they do suffer from the “only show in town” syndrome, see San Antonio Spurs fan and they live in Utah.)

Deron Williams and Carlos Boozer were great in both home games for the Jazz as they were able to bounce back from their respective sub par games in LA. X-factor Mehmet Okur was lethal from long range, and truth be told, the Jazz are downright nasty when Memo is hitting and complimenting the standard dopeness of Stockton/Malone 2000.

Where does this series go now?  Are we to assume that the Lakers SHOULD hold serve and win the series at some point just because they have the lower “little number” in front of their name?  I’ll reiterate an earlier point, Kobe’s health is important.  When an MVP goes down, that team is rarely any good, especially against the Jerry Sloan-led machine that is the Jazz.

I trust what I see, and I can’t see the Lakers losing at home.  If the doctor says Kobe ‘needs a backeotomy’ then the Lakers might be sunk.  But Kobe is not only the MVP, but he is the best basketball player in the world; his team isn’t that shabby, either.  Lakers in 7.