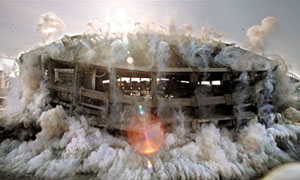 Let’s take the temperature of how Sonics fans are holding up.

Sonicscentral has a good conspiracy theory going about the move.

saveoursonics.org is off to a strong start, gaining 500 members in its first day of existence.

Supersonicsoul is trying to look past the whole thing by occupying itself with watching summer league. This is a day after an angry post about how maybe the team should be begging the fans to stay instead of vice versa.

A healthy dose of venom from a newly created blog called BIG LIARS.

A Seahawks blogger wonders if Seattle deserves the Sonics. This won’t go over well.

Some Sonics fans are shedding tears. Others are expressing their anger towards Howard Schultz.

Turnout for a protest wasn’t great, but don’t be discouraged. Keep fighting!

By the way, if anyone missed it, that picture up there is of the Kingdome’s demolition. Subtle, no?