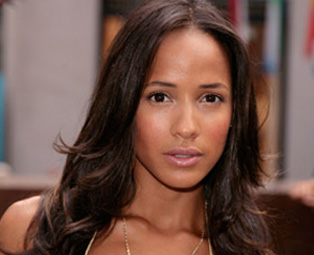 It’s movies like “Quarantine” that makes me feel the need to have a wifey, even though that’s the furthest thing from my mind right now (I need money!). But it would be nice simply because a dude like me appreciates the feeling of a shorty squeezing on my arm while she’s squinting her eyes slightly, peeking at the movie in anticipation of a decapitation. Horror movies were made for that right there.

I ended up rolling with my cousin, same way it’s been for the past few years, bar the L-Boogie nights (that’s the lil’ big sis). Funny enough, a gay couple that looked like a Latino version of Rob & Big ended up sitting next to us and doing what I previously described. I couldn’t help but laugh at times.

But that’s neither here nor there. The movie itself was based off a Spanish flicked called “REC.” The whole movie is filmed “Cloverfield” style and starts off kind of slow, following a reporter who’s covering the night shift at a firehouse in LA. It stars Jennifer Carpenter a.k.a. Emily Rose (a few years back I messed with a chick I dubbed Emily Rose — long and creepy story) as TV reporter Angela Vidal. Filming her every movement is her trusty cameraman Scott (Steve Harris). While interviewing and type flirting with fireman Jake (my homie Jay Hernandez), they get a call and roll out.

They get to the spot and meet with an old dude who said that he heard screaming coming out of an apartment on the 2nd floor and the woman who lives there wouldn’t respond when he knocked on the door. (Who’s to say she wasn’t getting busy Viagra status?) So two firemen and two cops enter and find an old ass lady who’s growling while rocking blood all over her nightgown. I know that sounds sexy, but she wasn’t Palin old (she can get it), she was Barbara Bush old. They try to talk to her to see where her head is at but next thing you know the old lady’s digging into the policeman’s neck with a vengeance.

After they wrestled that old lady off him they grabbed the mauled officer and broke boogie to the exit only to find that they’ve been locked into the building and aren’t getting let out under any circumstances. So they’re stuck in a building with a homicidal old lady who has a thirst for blood, a bunch of cornballs, a few birds and the ever-sexy Dania Ramirez (the only upside to being locked in that building). Did I mention that the cable, phone line and electricity had been cut? When the government wants you gone, they can make it happen.

Soon they come to figure out that whatever made that old lady go nuts, it can be transferred through saliva or blood on some zombie sh*t. Before you knew it, everybody’s turning into a zombie straight out of “28 Days Later” (gangsta flick), Scott’s Nikes were getting more screen time than Scott himself, the police are picking off anyone who comes near a window trying to escape, and Latino Rob & Big were screaming and jumping out their seats as if Justin Timberlake walked into the theater every 5-10 minutes. Straight comedy. After starting off slow, the ride got intense with every passing minute.

When it was all said and done, I gave the movie 3.5 Gangstas.

Though I loved the concept and the gory action, it was lacking depth. There was little character building, so you really didn’t care who got it or who survives. It was great entertainment, but like the Chris Rock’s “Kill The Messenger,” it left me feeling a little unsatisfied. More could’ve been done to make the movie better. A little background information on one or two main characters or on the virus that had the building quarantined off would’ve sufficed a bit. But at the end of the day it was a cool movie that I’d catch a few more times on cable. I mean, they did show Dania in cute little underwear. Sure she was beastin’ by then, but it was still off the hook. Plus the Spanish guy and black guy didn’t die in the first 5 minutes so it gets “special” brownie points for being realistic like that.