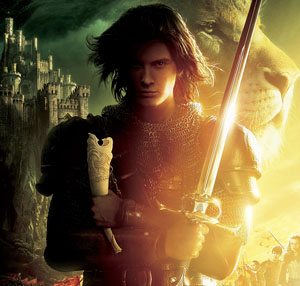 Only a savage like me would go see a Walt Disney movie and say something like “She can get it!” Of course I was talking about Anna Popplewell. She plays the role of Queen Susan. With her mouth closed, Popplewell got it poppin’. Clear blue eyes. Nice big red lips. And she’s very um… busty. But when she talks and you see that grill piece that even Paul Wall couldn’t brighten up, you remember that as a comedian, dating someone with a twisted smile just isn’t an option. L-Boogie rolled with the kid to see the flick and she agreed with me on that point. When you like to crack jokes you cannot date someone with a replication of Stonehenge in her face. And if you’re lactose intolerant like I am then you cannot date cheesy women. You just can’t.

But that’s neither here nor there. I’m here to talk about Chronicles of Narnia. As you all may know by now, it’s one year after the 4 kids came out of the closet and returned to England. Things have changed such as attitudes, egos, and bra sizes (Oooooh yeeeeah). Meanwhile in Narnia, one year in our world equates to 130 clips (1,300 years), and oh how things have changed there. Narnians (i.e. mythical beasts and talking animals) are believed to be extinct and the legend of the Kings and Queens of Narnia is nothing more than folklore.

Now the only kingdom to exist is one called Cair Paravel and Prince Caspian (Who had a wig piece that rivaled that of the ‘04 Ryan Jones) is next in line to take over the throne. But his Uncle Miraz has plans of his own, and once his wife births a son, tries to toe-tag the young Prince but fails to get it done. Thanks to his professor the young man is still breathing, but before he can leave the castle the prof. blesses him with a horn and I ain’t talking about a cell phone. It’s an actual horn to blow on. Once cornered by his uncle’s minions and a few midgets from the woods, Caspian blows on the horn before the midgets pull a Deliverance on his a** and make him squeal like a pig (By far thee most traumatizing scene in a movie I’ve ever seen).

Meanwhile back in England, Peter, Susan, Lucy and Edmond are anxiously awaiting their return to Narnia and are even questioning if they will ever be given that chance again. Then they’re suddenly whisked right back to the magical land where Michael Jackson is said to have gotten his Jesus Juice from. Once back in Narnia, a very egotistical King Peter is looking to run the show with or without Aslan who’s been MIA since their arrival. Meanwhile Poppin’ Popplewell is making googly eyes at Prettyboy Prince Caspian (The kid is a hunk tho). All the while little Lucy is keeping her eyes open for any sight of Aslan and Edmund is stuck playing the 5th wheel.

With the evil Uncle Miraz declaring war on all that is Narnian, Peter and Caspian have to find common ground to save not only the lives of the people of Narnia but their own as well. Okay, that sounded real cliché but it was necessary… I guess.

Watching this movie, one of the things that stood out the most to me was how Prince Caspian and his uncle and their whole civilization all resembled Latinos like a MF. If they weren’t straight outta Spain then they were at least straight outta Central America. And oh yeah, they were also responsible for “exterminating” all the mythical creatures and people of the old Narnia. So more than likely they were MS-13.

G-status, I have to give this flick 4 Gangstas.

I will say that it was better than the first if not for fast pace it kept throughout the movie (story telling, action sequences, etc.) then it would have to have been for Poppin’ Popplewell’s “development” as an actress. LOL. J/k. It really had to do with how dope the fighting sequences were and how it didn’t waste anytime to get the viewer into the movie. From the opening scene to the final frame, this movie never lost my attention. The screenplay was on point and the CGI was as gangsta as Lebron James’ old earth. That scene were the river came to life and started wilding, I swear to God the river looked like Jesus. Coincidence? I think not. L-Boogie laughed at the notion, but I’m dead a**. Either way, I loved the flick and wish I myself could go to a far away land where white girls have big red lips like Angelina Jolie and animals talk. Unfortunately where I live I only have the latter of the two.