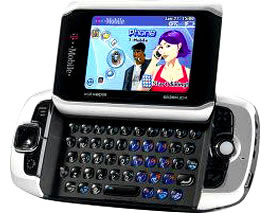 Sorry for the strong language, but as the likes of Quentin Tarantino, Kevin Garnett and the cast of Deadwood all know, it never hurts to throw a random “motherf*ckin” into a sentence. Just drives home the point, you know?

Anyway, this is a bit of a theme column, and the theme is “Ryan needs a new Sidekick 3.” The reason this is the theme is that, generally speaking, I’ll be writing this column on my Sidekick 2, which these days is kind of like Allen Iverson: It’s cool and iconic and popular with rappers, but also sort of beat up and probably on the verge of a downward trend in its effectiveness. And much like AI could probably do with a trade, I could do with trading in my SK2 for a shiny new SK3. This will allow me update this column more often, and those updates would undoubtedly include many references to just how terrific my new Sidekick 3 is.

Jackson, I got your email. Let’s make this happen.

For those of you who don’t work for T-Mobile or its related companies and clients, I will also hopefully find time to talk about basketball. In fact,, I’ll probably talk MOSTLY about basketball, because that seems like the right thing to do. Given the current time of year and the fact that, unlike Jake Appleman, I am neither crazy enough nor in possession of enough free time to write long, David Foster Wallace-esque odes to Ghostface and Entourage and whatever the hell else that kid writes about, I’m not sure what sort of content I’ll be filling this space with. Until I figure it out, here are a few things that might be helpful to know about me:

1. I grew up rooting for the greatest basketball team of all time, the ’80s era Showtime Lakers. You cannot argue with either aspect of that statement, because a) I was in fact born in Long Beach, CA in 1973 (and left some years later, because there was so much drama there…) and came of age as a sports fan during the Magic & Kareem-led 1980 championship season, and b) those teams had the sickest and most versatile collection of talent ever assembled in NBA history. This is an undeniable fact, and the sooner you accept it, the better for all of us.

2. I am no longer a fan of the Los Angeles Lakers. One of the great things about working at SLAM for the past seven years is that I’ve learned a lot of things about the NBA and its players that I never would’ve known otherwise. This is also the third-worst thing about working at SLAM; I can’t tell you the other two because I’d get fired. My point is that it’s really, really hard to root for a franchise when you know too much about some of the people who play for it. So, I mostly root for players now, guys I’ve gotten to know and admire. Theoretically, you might then assume that there are prominent Laker players who I’ve gotten to know and do NOT admire. Theoretically, you would be right.

3. Some of the people I do root for include Derek Fisher, Morris Peterson, Jamal Crawford, Jermaine O’Neal, Sebastian Telfair, Marvin Williams and LeBron James. Admittedly, the last one is partly because I don’t want to be on the wrong side of a guy who’s planning on being the first billionaire athlete, and might end up being the best who ever played the game. Thankfully, I actually think LeBron is pretty cool, too.

4. I hate the NCAA. This is because the NCAA is even more corrupt and hypocritical than most other things in the world, which is saying a lot. I like college basketball, especially in March, but I can honestly say that my enjoyment of the sport is diminished substantially by the crooks and liars who run the game. Along those lines, I hate Billy Packer (and if you ever apply for a job at SLAM, you need to hate Billy Packer too. You cannot get hired here if you don’t) and I am not very fond of Mike Krzyzewski, although I think I hate him slightly less than I used to, if only because he’s not Larry Brown.

6. I hate ESPN. Monopolies aren’t good for anyone except the, um, monopolizer. They also make for an easy target, which is why every time they get something wrong (more often than they should, considering their resources), in basketball or in general, I will remind you of it. I can only hope you enjoy it half as much as I do.

7. On a brighter note, I think — nah, I know — that it’s a good time to be a basketball fan. The combination of the LeBron-Wade-Melo triumverate and the ceaseless influx of ever-improving international players means we’re on the verge of another golden hoop era, maybe the best since the mid-late ’80s heyday of Magic, Bird & Mike. Don’t front — you WILL be telling your kids or grandkids about these guys in 30 years.

8. I love Mark Cuban, if only because the alternative to Mark Cuban is boring and uninspired, and Mark is neither of those things. Ever.

9. I love Shaq, for pretty much the same reasons I love Mark Cuban.