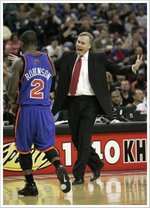 Nate Robinson hasn’t seen the court in nine games. The Knicks have gone 6-3 in that period of time. And things are getting awkward in Gotham.

Robinson’s agent went on the offensive on Saturday, basically demanding a trade for his client. According to Nate’s rep, Aaron Goodwin, head coach Mike D’Antoni has something of a personal vendetta against the diminutive guard.

“I have asked the Knicks to move Nate,” Goodwin told The Post “At this point it’s personal. I don’t think Mike [D’Antoni] has [ever] done anything to show it’s basketball-related. I felt that way talking to Walsh during the Chicago game when they went 4-of-23 in the third quarter and the gentleman didn’t look for Nate to help out. They had a 39-point second half and for whatever reason he didn’t consider Nate.”

Oddly enough, Nate came out and told the media yesterday that he wants to remain in New York, assuming of course that he’s no longer glued to the bench.

According to some, if a trade were to be worked out (something Nate has the right to veto), Robinson would prefer to land in Boston. A buyout also sounds like a plausible option for the Knicks and their embattled point guard.