The NBA Dress Code is Nonsense

I doubt I was the only person to think or tweet about the dress code when I saw what Russell Westbrook wore to his game Saturday (pic above)… but I don’t follow that many people—or even look at my phone that much on weekends—so I’m taking the credit for jumpstarting this. And, as I said, I hoped the NBA did not have a dress code anymore. It was an arbitrary action, drafted directly in response to the “Malice at the Palace,” and it had all sorts of racial overtones to it. Allen Iverson—only one of the most popular players to ever grace an NBA floor—was being targeted for what he, and players who looked up to him, wore. Because some corporate sponsors were uncomfortable with the way dudes were dressing off the court? GTFOH.

The reason why I’m worked up now is because it exposes how the whole thing was haphazard PR bullshit. If the NBA truly cared about its players sartorial choices—as if there was indeed a link between what dudes wore to the game and the product they put forth while playing—then Russ would have gotten the biggest dress code violation ever on Saturday. He’s been toeing the line for awhile now, but dude showed up in a completely sliced-up, totally sleeveless shirt. THAT IS THE FIRST VIOLATION IN THE DRESS CODE!

Please read the original rules, as I found in an ESPN.com/Associated Press story from October 18, 2005, when the dress code was announced:

NEW YORK — There will be no more dress down days in the NBA.

The league announced in a memo to teams on Monday that a minimum dress code will go into effect at the start of the regular season on Nov. 1. Players will be expected to wear business casual attire whenever they participate in team or league activities, including arriving at games, leaving games, conducting interviews and making promotional or other appearances. Specific penalties have not yet been announced, but NBA spokesman Tim Frank said players and their teams will face fines for violations—adding that repeat offenders would be subject to suspensions…

Players will no longer be able to wear:

• Chains, pendants, or medallions worn over the player’s clothes.

• Headphones (other than on the team bus or plane, or in the team
locker room).

Players will also now be required to wear a sport coat on the bench when they are not in uniform.

Not all players feel that the new dress code is in the best image of the League. “I understand they’re making it out to make us look better to corporate and big business. But we don’t really sell to big business,” Suns guard Raja Bell said. “We sell to kids and people who are into the NBA hip-hop world. They may be marketing to the wrong people with this.”

Commissioner David Stern is expected to announce the penalty for dress code violations next week. 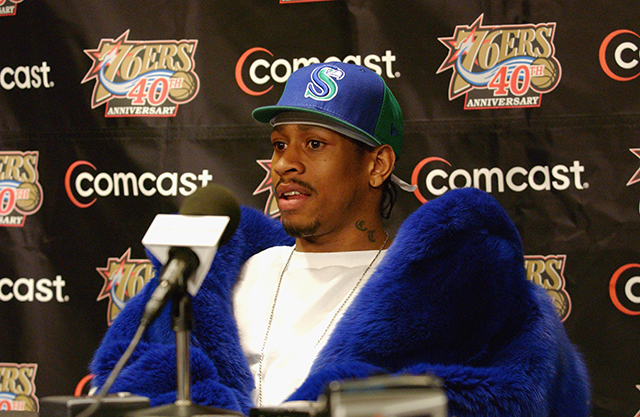 Yesterday, we reached out to the NBA, with the following question: “There’s lots of conversation in our office this am, as well on social media, about whether or not the NBA still has an official dress code. Is there any official word from the League?”

The response, which took six hours to generate, was: “Yes, we have a dress code.”

Nothing else. Why does a League that runs the sport we all love so dearly have to be so lame in matters like this? Please strike the dress code from the “rule book,” apologize to AI for the strife you caused him—and the money you cost him by making him buy “business casual” gear. And continue to let Russell Westbrook wear whatever he wants. Like AI—a League MVP, lest you forget—should have been allowed to.

The NBA Made Joakim Noah Change His Outfit (PHOTO)

NBA Coaches Get Their Own Dress Code