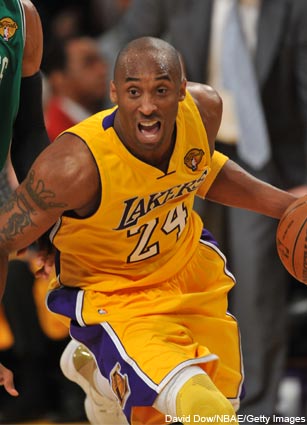 Hey everyone…Lang here, with my main man Marcel Mutoni (alliteration!) by my side, high above courtside at the Staples Center, ready to liveblog Game 1. Internet access at the Finals is always about as inconsistent as Andrew Bynum, so I’ll do my best to keep it cracking. As always, your comments are encouraged down below.

PREGAME
• Went to David Stern’s press conference, which was entertaining as always. Most interesting answer was probably when David Aldridge asked if the NBA was really in as bad a shape financially as Stern has been saying it is the last few months, why were all these guys buying teams recently. And Stern said it was partly because of the promise of a new collective bargaining agreement. Lots of posturing going down in there.

• Mutoni just found his seat in the 300 level next to me, and then realized he didn’t get an internet “code,” and he had to run all the way back down to the basement. Fun.

• Celts open with a simple give-and-go to take a 2-0 lead, and on the next possession, something happens with Paul Pierce and Ron Artest and they go down in a heap, almost like in greco roman wrestling. That was fast. Refs call a foul on Ray Allen and double T’s on Pierce and Artest. 11:27 to go in the first!

• At the risk of jinxing things, this is BY FAR the best internet access I’ve ever had at a Finals game. Amazing.

• Forgot to mention before the game I saw Rick Fox with a microphone from EXTRA interviewing someone I didn’t recognize, an older guy with a leather jacket and a trucker hat. I asked someone who it was…and it was steven Spielberg.

• Uh-oh, Fisher picks up a quick scond foul and here comes Masheen. Bynum gets a dunk on a loos ball and Ray Allen answers. Lakers up 6-4.

• Ray Allen picks up his second personal with 6:56 to go in the first. Here comes Tony! Pau Gasol celebrates with a walk.

• Boston seems content going one-on-one on the block, and LA’s not doubling. Lots of dudes coming open off weak-side cuts for the C’s.

• Pau makes up for the walk with back-to-back buckets and pushed the L.A. lead to 16-10 at the first timeout of the first quarter.

• Kobe picks up his first trying to fight through a screen from Pierce. Pierce to the line cuts it to an 18-16 Lakers lead. Then Farmar turns it over and has to foul to stop a break. Rondo, for the heck of it, does a windmill and nearly makes it.

• Celtics have had a couple of turnovers trying to enter the ball into the post. L.A.’s jumping those passes. Odom to the line and hits 1 of 2, Lakers up 20-18.

• Tony Allen just picked up his third foul! With Ray Allen also in foul trouble, Michael Finley has been defrosted and inserted into the game.

• Interesting that Joe DeRosa came back from being suspended for tossing a ball at a fan in Orlando to ref Game 1 of the Finals.

• BTW, with Marcel and I here tonight in the press box is Jia Peng from SLAM China. He just had to type his name because I  was to understand how it was spelled.

• So after one, the Lakers lead 26-21. Lots of fouls, not a lot of momentum. Boston’s shooting guards have 5 fouls after one quarter.

• The Lakers run an iso for Farmar out of the timeout. #thingsthatmakeyougohmm

• Can we abbreviate Dream Shake as Drake? Or is that offensive to Hakeem?

• Just ran to the bathroom here in the upper level, where someone has put Celtics basketball cards in each of the urinals. Not kidding.

• With 7:35 to play in the first half, L.A. is clinging to a 32-31 lead. Boston’s hanging in there, even with half their backcourt in foul trouble. Tony Allen just returned with 3 fouls. If he doesn’t foul out before halftime I’m going to be disappointed.

• Paul Pierce just got a standing boo-vation from the Lakers fans. Nice.

• Not sure the Lakers drew up a 3 for Artest out of the last timeout…but it worked. And then Ron scores on a breakaway!

• Ray Allen picks up his third foul and sends Shannon Brown to the line. The Celts look a step slow defensively in the second quarter. LA on a little 7-2 run out of that last TO. Lakers open up a 49-37 lead with 56 seconds left in the half.

• Wow, Rondo rondos the Lakers and hits a step-back bucket at the halftime buzzer to cut the lead to single digits. At the half, LA leads 50-41.

THIRD QUARTER
• During the half I ran downstairs to get a couple of water bottles, and I apparently missed the halftime act, Quick Change! Crap! Only thing that could be better is if the NBA brings back Christopher at some point this postseason. You old-school NBA heads will get that one.

• Some halftime numbers: KG 2-7, Perk 1-1, Boston bench 8 points and 7 fouls. Lakers shooting 53 pct from the floor. Kobe leads everyone with 12 points and with 4 assists. Pierce leads Boston with 5 boards. Gasol has a quiet 11 and 7.

• Kobe comes out hot, and then the Lakers get it to Bynum in the post. Rondo answers. Then L.A. runs an iso for Kobe on Ray Allen, and Ray immediately picks up his 4th foul.

• Kobe gets wiped driving to the basket and complains but doesn’t get the T. If that was Perk, it would’ve been a T. Speak of the devil, Perk dribbles out of bounds along the baseline, and then Rondo picks up a foul, Boston’s 4th team foul with 7:50 left in the quarter. Gasol hits two to make it 59-48.

• L.A. with a breakaway dunk for Kobe, and the Lakers open up a 65-52 lead as a Boston Sucks chant erupts.

• After L.A. opens up a 13 point lead, their biggest of the night, Boston cuts it back to 9, before Gasol scores again to push it to 11. I looked down to type that and looked up and Gasol was laying under the basket and KG was going to the line.

• LA goes right back to their Kobe iso, and he draws Ray Allen’s fifth foul and puts L.A. up 15.

• Of course, Rasheed cuts it to a 13 point lead. And then fouls Fish on the other end.

• After a switch, Big Baby ends up with the ball isolated against Fisher, and he has no idea what to do. Celts miss a shot, and LA comes back and Gasol gets fouled.

• And there’s the technical foul on Rasheed. Didn’t see that coming. Fisher hits the T, Gasol hits one of two, and L.A. pushes it to a 17 point lead.

• Rondo tries to create something, dashes into the lane and gets called for a charge. L.A. returns and Ron Artest drains a righty three fading to his left. Of course he did.

• BTW, over at Chavez Ravine, the Braves lead the Dodgers 3-0 after 4 innings.

FOURTH QUARTER
• Sheed opens the fourth with a tomahawk dunk on Gasol, then goes after a loose ball and leaps over the front row of fans. That could’ve been nasty. And then Sheed fouls Gasol. Big 40 seconds there for Sheed.

• Nate Robinson enters and is given free license to go nuts. He does, and creates a bucket for Big Baby. L.A. has a few turnovers, Boston cuts it to 13 with 8:28 to play and the crowd in the Stapler seems a little unnerved. Luckily the incessant ads on the scoreboard for “Grown Ups” takes everyone’s mind off it.

• L.A. pushes it back to a 15 point lead, before Derrick Stafford makes a super late call and sends Ray Allen to the line.

• Boston gets KG iso’ed against Shannon Brown in the post, and KG finds a cutting Big Baby, who can’t outjump Artest. Ron gets the block, L.A. hits a streaking Gasol for the dunk and makes it a 15 point lead with 6:20 to go. Still, doesn’t quite feel like this game is over yet. The Laker Girls celebrate by doing a dance to “Boom Boom Pau.”

• Coming out of the timeout, the Lakers play “Welcome To The Jungle,” which gets the crowd pumped up. As it should. Both teams return with their starting fives, and Gasol fouls Ray Allen, who makes both.

• Just realized Boston’s only hit one 3 all night. And it was by Rasheed, of course.

• Boston forces a 24 second clock violation. Then Ray Allen forces a three and misses. Boston gets the rebound and Rondo spots KG alone under the rim and whips him the ball, and KG, standing their by his lonesome, just doesn’t have the legs to get up and dunk it. He fumbles the ball away, L.A. grabs the ball, hustles down and Odom converts to push it back to 15 points with 5:17 to play.

• Again, Boston cuts it to 11, now with 4:11 to play. But they can’t seem to get over that double-digit hump. Accordingly, Kobe hits a cutting Lamar and makes it 13, then Boston misses and L.A. misses and Boston misses. The crowd finds a voice…and Kobe misses, then Boston turns it over. 2:29 to play, Lakers lead 95-82.

• My man from SLAM China just told me this is the first NBA game he’s ever been to. He deems it “very cool.”

• Artest nails a three from the wing, which just about seals it. The crowd chants “We Want Tacos” as the Lakers flirt with 100 points. They miss three attempts to break 100, and as the game dwindles, the fans switch over to the always popular “Boston Sucks” chant. Then, as the clock runs out to end the game, Kobe rips a 3 to give the crowd tacos and the Lakers a 103-89 win.

• BTW, Phil Jackson’s teams are 47-0 when they win Game 1 of a Playoff series. Just saying.

• Thanks for hanging in here all night. Later…