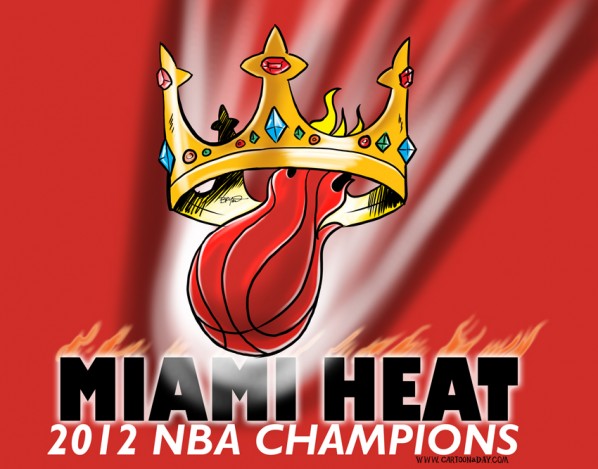 In an informal poll of 20 NBA front-office executives and coaches, in which the League’s elite basketball minds casted votes on their favorites for the 2013 Championship, only three teams received first-place recognition.

Expectedly, the defending Champion Miami Heat led the way, receiving 16 first-place votes. Following the Big 3 were the boys from Oklahoma City, who garnered six first-place votes. And last, but definitely not least, with a few superstar additions to their roster, the always-entertaining Los Angeles Lakers made their way into the conversation, receiving two first-place votes. The 2012-13 season tips-off on Tuesday, October 30, with the Heat hosting the Boston Celtics in an Eastern Conference Finals rematch. With the current NBA landscape shaping up to be as exciting as ever, it’s safe to say we’ll be in for one of the best NBA seasons in a long, long time.

Here is the complete breakdown of the poll, followed by some quotes, all courtesy of SI.com:

— Eastern Conference general manager who picked the Lakers as the front-runner but didn’t select a second or third team: “Lakers, hands down. They landed arguably the best center in the NBA and the only point guard who can bring out D12’s best. It all hinges on how much Kobe is willing to defer.”

— Eastern Conference head coach who voted Miami, Oklahoma City and Los Angeles: “Miami because of LeBron; OKC because of Durant and its experience of losing last year; the Lakers because of Kobe, Nash, Gasol — in that order. IF Howard is healthy, he will be the fourth reason.”

— Western Conference executive who voted Miami, Los Angeles and Oklahoma City: “LeBron and Dwyane Wade will carry the Heat once again. The Lakers will need to jell and stay healthy, but with their new mix of players they will be tough to beat. I don’t see the Thunder getting back to the Finals if the Lakers play to their potential, but the Thunder should be back in the West finals again for another crack at it.”