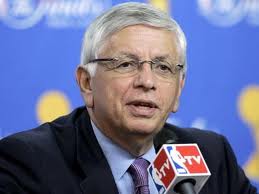 Another meeting, another non-conclusion. The players and owners gathered well into last night, with the result being what many are referring to as a “drop-dead” offer from the NBA, one that the union will have to either accept by this Wednesday—a take-it-or-leave-it date set by the League—or risk losing the entire season. Thus far, there have been no signs that the union is interested in embracing said deal. Great.

Here are some details, via Yahoo!:

NBA commissioner David Stern delivered the Players Association a take-it-or-leave-it offer, threatening the owners’ proposals will become substantially worse if the union doesn’t accept the deal by the close of business Wednesday.

“We’ve been given the ultimatum,” union president Derek Fisher said, “and our answer is, that’s not acceptable to us.”

Union officials scoffed at Stern’s depiction of the proposal, saying the commissioner is merely trying to “strong-arm” the players into accepting a bad deal.

If the players don’t agree by Wednesday to accept the proposal – which Stern described as including a revenue split that could give the players as much as 51 percent and as little as 49 percent – then the owners’ new offer would drop to 47 percent of basketball-related income for the players and include a “flex” salary cap.

“We want to allow the union enough time to consider our most recent proposal, and we are hopeful that they will accept,” Stern said, after acknowledging [union attorney] Kessler had already rejected the offer.

We’ll keep you updated as more info makes it way out, but in the meantime, we’re not only left wondering if the players will accept the deal on the table, but also if both parties are really willing to blow everything up…in early November?