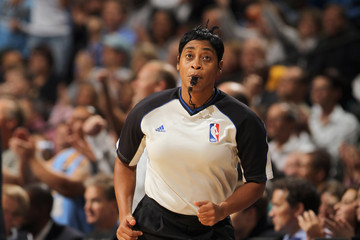 Violet Palmer, the NBA’s first ever female ref, is marrying her partner of 20 years this Friday. Palmer came out to her colleagues back in 2007, and is now public with her sexual orientation. Per the AP:

”This is actually the big formal coming out,” Palmer said. ”We are saying to the world, to everyone, here’s my wife of 20 years. This is the big coming out.”

”I always wanted people to just look at my work,” she said in a phone interview. ”Not look at my personal life, not look at my sexual preference. That doesn’t matter. I just wanted people to say, `Wow, she is a pretty damn good referee.”’ […] Palmer said she didn’t initially reveal her sexuality to the NBA while working her way through the ranks, but eventually came out to her fellow referees about dating Stine.