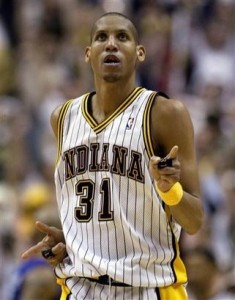 Players who kick out their legs on jumpers are in trouble. The so-called “Reggie Miller rule” will punish those who try to draw fouls on the release of their shots. Per the Boston Globe, which details other forthcoming changes: “League officials will use replays for three additional calls this season. Officials will review plays in which defensive players may have taken charges but were in the restricted area under the basket. If by review an official finds the player was in the restricted zone, he can change the call to a blocking foul. They will also call for reviews of goaltending in the final two minutes of games, and all flagrant fouls will be reviewed to assess their classification. Flagrant fouls called during games can never be downgraded to personal fouls but can be downgraded from a Flagrant 2 to a Flagrant 1, for example. Also, officials will emphasize the ‘Reggie Miller rule’ for a shooter who kicks his legs out during jump-shot attempts to create contact and draw fouls. Officials plan to call offensive fouls on shooters who blatantly kick out their legs to initiate contact.”