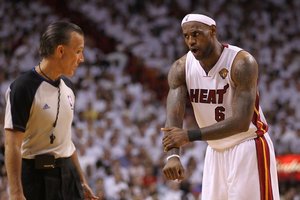 The NBA regular season kicks off on December 25th, and the game will look and feel slightly different to fans.

Of course, it’s players, coaches and referees who will need to make the biggest adjustments.

The new rules center on the interpretation of offensive fouls, traveling violations, and most critically, speeding up the game (especially the last few minutes, when it usually degenerates into an interminable free-throw shooting contest.)

ESPN reports on the upcoming changes:

According to Stu Jackson, NBA vice president of basketball operations, refs will be less likely to reward players who attempt the infamous “rip-through” move to draw fouls, and you can expect to see more Flagrant Level 2 fouls called when contact is made on airborne offensive players.