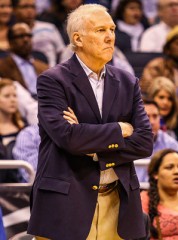 In the eyes of the NBA, the worst thing any player, coach, front-office executive or referee could ever do is mess with the League’s money.

It’s why the San Antonio Spurs are about to be hit with what Commissioner David Stern menacingly called “substantial sanctions.” Head coach Gregg Popovich sent his star players home prior to a big nationally-televised game in Miami, which made corporate partners unhappy, and clearly infuriated Stern.

This is all about money and image for the NBA — they had never sanctioned Popovich and the Spurs for this type of thing before (though other organizations have been slapped on the wrist for resting players.) Deputiy Commissioner Adam Silver even said the following last April after the lockout, when asked about teams purposely sitting out healthy players: “This is a unique season and fans understand that competitive strategy is part of what goes into coaching this year … The strategic resting of particular players on particular nights is within the discretion of the teams … And Gregg Popovich in particular is probably the last coach that I would second-guess.”

More from the Express-News:

Stern can’t tell Popovich who to play and when to play them, anymore than he can dictate minutes. That’s why the league has allowed Popovich to do this in the past. But Thursday was different for Stern. This was TNT, with the defending champs, with a game that had been advertised as a potential Finals matchup. This is the kind of marketing night that Stern built his empire on, and there was Popovich, often resistant to the Stern way of doing things, undercutting the selling of LeBron.

Popovich and the Spurs said after the game they hadn’t heard about Stern’s “unacceptable decision” statement. Once told, they wished even more that one more 3-pointer had kicked in. “Man,” Matt Bonner said, “it would’ve been great if we won.” Even in losing, Popovich looked like a coach with a plan. His subs played the system and with confidence; each might be better for it. Now, all of them finally get off this 10-day road trip for a divisional showdown with Memphis with four starters rested.

Prior to last night’s tilt against the Heat, and before he was told of the League’s angry stance, Gregg Popovich explained that he understood why some might be unhappy with his decision, but that it was ultimately made with the best interests of his team in mind.

No one knows yet what the punishment will be, but it’s likely to be harsh enough that Pop will have to come up with more creative ways to find rest for his aging stars.