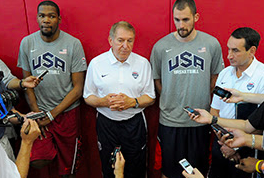 The 2014 USA National Team will assemble in Las Vegas on July 27 for training camp in advance of the FIBA World Cup, which runs Aug. 30-Sept. 14 in Spain.