The Indiana Hoosiers, whom many have ranked as the top basketball team in the nation coming into the season, will have to live up to expectations without two of their big men—Hanner Mosquera-Perea and Peter Jurkin—after both players were told by the NCAA they must sit out for the first nine games of the season. Apparently, an investigation by the NCAA concluded that both players received impermissible benefits from their AAU coach and are now being told they must repay it back before being reinstated. But here comes the interesting part of the story. The NCAA says the benefits, which included plane tickets, meals, a laptop computer, cell phone and clothes, are actually legal in this case being that their AAU coach, Mark Adams, was also the players’ legal guardian. Yet the reason why the players are being punished is because Mr. Adams donated $185 to Indiana’s varsity club from 1986-92, considering him a booster. Unreal, huh? From ESPN:

“No. 1 Indiana will open its season Friday night without two key freshmen players. On Tuesday, the NCAA suspended 6-foot-8 forward Hanner Mosquera-Perea and 7-foot center Peter Jurkin for the first nine games this season and will require them to repay a portion of the impermissible benefits they received to a charity of their choice. Enforcement officials at the governing body officials found the players’ AAU coach Mark Adams provided them with $9,702 and $6,003 in plane tickets, meals, housing, a laptop computer, a cellphone and clothing. Mosquera-Perea must pay back approximately $1,590. Jurkin must repay $250 to be reinstated… “Despite the minimal nature of Mr. Adams’ donations, and the fact that the last donation he made was more than 15 years before he provided expenses to a prospective student-athlete who enrolled at the institution,” the NCAA wrote in its letter to the school. “Mr. Adams must be considered a representative of the institution’s athletics interests.” 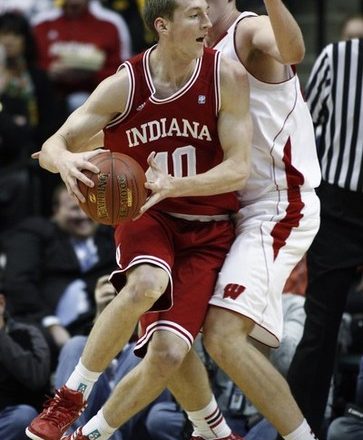