Nets for Sale, BK in Doubt 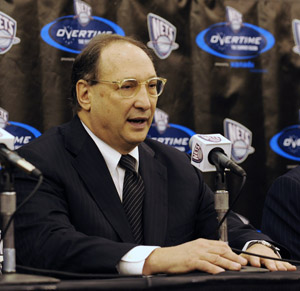 Every time we link to another story on the Nets planned move to Brooklyn, I try to chime in with a negative comment, chiding the Nets’ owner for his land-grab of a move, and stating the increasingly obvious, that the Nets should leave the run-down Meadowlands Arena in the shadow of Xanadu, and move to Newark…

I’ve never taken the time to do my own column on the topic, however. Thankfully, Steve Politi of the Star-Ledger did. A day after his colleague, Dave D’Alessandro, wrote the news story about how Ratner is trying to find investors (from Russia) to become part (majority?) owners of the team and then still shepherd them to a borough that doesn’t need them and much of which doesn’t want them, Politi let loose in Saturday’s paper with a calm and reasonable destruction of the Nets’ shady owner, who bought a basketball team for real estate purposes and is watching that investment crumble.

There is no blueprint for his arena. There is no world-class architect designing the complex. There is no financing in place for the project, and there is still the messy matter of the Court of Appeals hearing that, if lost, would sabotage the entire Atlantic Yards deal once and for all.

Other than that, it’s a great investment.

Ratner never cared about owning a basketball team, and now it has become clear that he cares little about destroying one, either, so long as he finds a way to complete his real estate deal.

Funny, but looking back, it was Alonzo Mourning who recognized his intentions from the very beginning, and the former Nets center was vilified and run out of town for it.

“I asked him, ‘Other than your investment for financial purposes, what’s the reason you bought this team?’ And you can ask anybody in there: He said, ‘To move it to Brooklyn.’ I didn’t hear ‘To win a championship.’ I didn’t hear that come out of his mouth.”

To think, the Nets were a few victories away from that championship when Ratner bought them, and six years later, the idea is laughable now. Look at what they have become.

The star-free roster. The bottom-barrel payroll passed off as cap space when it is really just the remains of a fire sale. The team is even removing the “New Jersey” from the road uniforms, as if it could possibly insult fans more. But hey, plenty of season tickets are available.

As a former Net fan, I say the whole thing is pretty sad. As a member of the basketball media, I say I wish I could have written such a perfect piece. And as a former resident of Prospect Heights, Brooklyn and a current resident of Essex County, NJ, I’ll pre-empt my usual trip to the comment section on this one; just move to Newark!!!