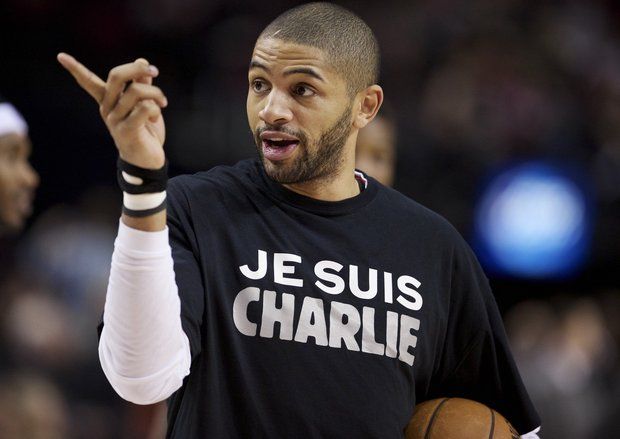 Portland Trail Blazers forward Nicolas Batum rocked a black “Je Suis Charlie” t-shirt Thursday night prior to a matchup with the Miami Heat, in response to the massacre of 12 people in Paris this week at the French satirical newspaper Charlie Hebdo.

Batum, a proud Frenchman and Parisian, gave the shirt to injured teammate Robin Lopez to wear during the 99-83 win.

“I woke up (Wednesday) morning and it was the first thing I saw.,” said Batum. “That’s sad, twelve people killed like this. I have no words to explain what happened. I read that this morning, people came in and shot police. It’s sad for those people who tried to do their jobs.

There has been speculation that the shootings at Charlie Hebdo, which had been a target of firebombing attack in 2011, were carried out by Islamic extremest upset with cartoons featuring various key figures in the Muslim community.

“We have different opinions, okay,” said Batum. “But you’ve got to respect everybody’s opinion. You can’t shoot those people… You can’t kill someone because you disagree with somebody.”