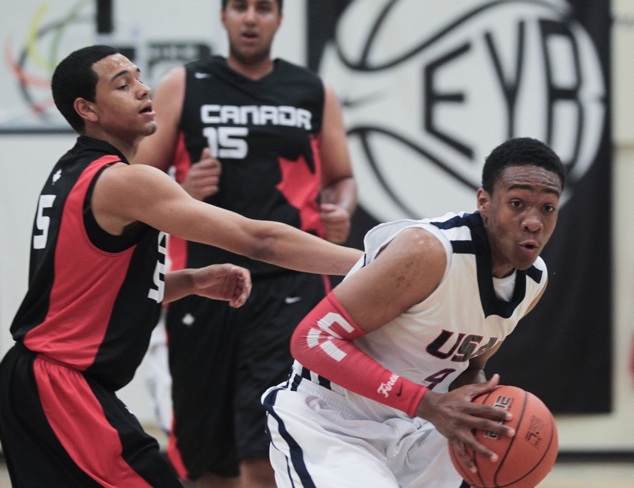 Courtesy of our friends at Position Sports:

Here is a quick recap and a photo from Sunday’s games.

The day opened up with a great International match up between Chinese – Taipei and Puerto Rico. Hung Kang-Chiao lead Taipei  to victory with 22 points and 6 rebounds, leaving Taipei with an overall record of 1-2 for the weekend.

Brazil put up a great fight in their  73 – 62 win over Germany in the early evening game. Brazil was lead by outstanding guard Gustavo Scaglia who chipped in 19 points in the victory.

There was a great match up in the afternoon game between USA West and USA East. Omar Calhoun carried the East with 24 points in their 122 -114 victory. Seven of the East players ended the game in double digits including Braxton Ogbueze (22) and Cameron Biedscheid (16). Aaron Gordon shined for USA West tallying 30 points and 7 rebounds.

A very competitive match up in the championship game between USA Midwest and Canada. Archie Goodwin once again put on a spectacular performance in the victory over Canada, leading his team with 23 points. Up two at half, Canada lead by Anthony Bennett (20) and Andrew Wiggins (18) could not hold off their lead in their 94-99 defeat against the stellar Midwest team.