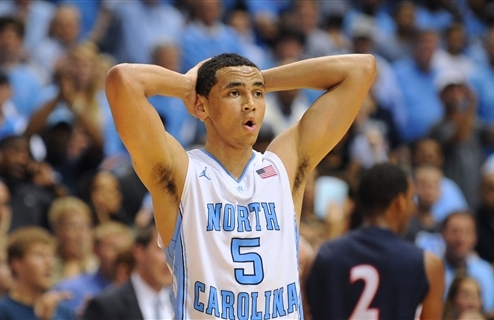 Arguably the best point guard in America will miss the start of the 2015-16 season. No. 1-ranked North Carolina‘s Marcus Paige, a second-team All-ACC performer last season and a first-team selection the year before, will miss the next 3-4 weeks due to a fractured right hand, which is his non-shooting hand. Paige suffered the injury during practice on Wednesday. The Tar Heels’ first game of the season tips off on Nov. 13, and it is unknown if junior Nate Britt or sophomore Joel Berry will fill in for Paige.

University of North Carolina senior guard Marcus Paige fractured the third metacarpal on his right (non-shooting) hand in practice on Tuesday and is expected to be out of action for three to four weeks.

“I hate it for Marcus,” says head coach Roy Williams. “He’s such a wonderful young man – one of the most outstanding people I have been lucky to coach. I know he’ll handle this with the same level of maturity and responsibility that he does everything else.

“Our team will certainly be challenged in his absence. We will need everyone up and down the roster to step up their games and take care of each other and our team until he gets back.”