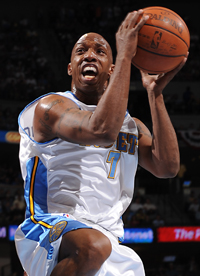 Three nights separated the play of Games 1 & 2 of the Western Conference First-Round series between the New Orleans Hornets and the Denver Nuggets. I am sure most of you can fill in the “choir” role as I “preach” about the idiocy that is the NBA’s postseason scheduling. Too much time separates the games, but what has dominated the quiet spaces between actual basketball has been the discussion surrounding the physical nature of the series first tilt.

Were the Nuggets playing dirty?

Was Dahntay Jones being physical or just dirty?

Hornets’ Head, Byron Scott admitted that only part of Jones’ play was physical (ensuing the rest was on the dirty side), but conceded that the current NBA is not the one he cut his teeth on.

“This is so much watered down now. This isn’t a physical game. I wish they would go back to the old rules.”

Scott’s counterpart from Denver, George Karl analogized pregame that winning teams are associated with being physical, while losers are often considered dirty, and after just one game conceded that, “It may already be at that point where they don’t like us and we don’t like them.”

The integral Game 2 gave each team a chance to either solidify their impressive postseason start or the opportunity to shed their pretender status. Grit, hustle and heart would all be imperative as both teams look to take control of the seven-game series.

Much like the game just days earlier, Game 2 started off close and hard fought but with some actual fluidity to the play. Don’t be mistaken, however, as it was punctuated with bits and pieces of the physicality that the visitors took issue with earlier in the week.

Once again, it was Denver’s prodigal son, Chauncey Billups that controlled the pace of the game, scored when necessary, set up his teammates and made life tough on both ends of the court for Hornets’ star guard, Chris Paul. Mr. Big Shot outplayed Paul going for 31 points (hitting 4-6 from 3-point) in the Nuggets’ eventually easy 108-93 win.

Again, Chauncey’s box score was flawless with nary a turnover in either of the series’ first two games. (For the record, CB7 has 67 points, 12 assists and 0 TOs for the two-game set in Denver)

“I’m in a nice groove right now, but it’s really not all me, we’re playing well right now.”

Both ends of the court were dominated by the home team, as the Nuggets have proved to be far superior to their opponents in every facet of the game taking an eight-point lead into halftime. They continued to physically and mentally frustrate Paul whether it was Jones or Billups drawing the defensive assignment. The Hornets turned the ball over three times as often (15:5), which led to a huge advantage for Denver in points off turnovers.

“It has nothing to do with the physical stuff tonight,” mentioned Coach Scott postgame. “We had too many turnovers and defensive lapses.”

Although, his final numbers were more than respectable, Hornets’ forward David West again struggled to hit open shots, missing 11 of his first 17 attempts from the field. With little to no depth coming from Coach Scott’s bench, West’s ability to efficiently score is paramount for the Hornets to even keep one game close.

After a poor-shooting effort in Game 1, Carmelo Anthony bounced back with a patient, energetic and efficient night (scoring 22 points and dishing 9 assists out of constant double teams). Melo had a stand-out third quarter stretch while the Hornets were hitting shots of their own, hitting shots combined with an effort on the defensive end that continues to impress.

“We wanted to come out aggressive,” recalled Anthony after the win. “But we’re playing our best defense of the year.”

Both teams shot the ball extremely well from long-range (each went 9-16); about the only thing that kept the Hornets still a buzzin’ through the game’s first twenty-four minutes.

Tonight, again, things were physical. There was a constant fear that control over the game might slip through the referees’ grasp, but it was Billups, the most experienced player on the court that not only took control, but again proved the difference.

“He’s playing really well; well as you can play right now,” reflected Paul when discussing Billups’ first two games. “Not too much you can do.”