OKC Thunder Not Worried About Team Chemistry Without James Harden 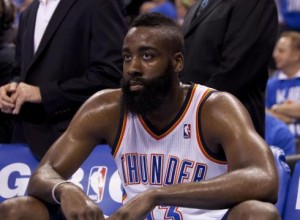 Perhaps the OKC Thunder are still stunned by the James Harden trade to Houston, as they’ve gotten off to a slow start this season. But, to a man, the Thunder think they will be fine going forward. Despite the major shakeup, team chemistry isn’t and won’t be an issue in OKC, according to the Thunder. Per CBS Sports: “The Thunder made the decision not just to look toward the long-term plan when they traded Harden, but also to place that future in the hands of Russell Westbrook and Kevin Durant. General manager Sam Presti not only believes in his vision, but in his two young superstars as well. The core of the Thunder might be shaken, it might be rattled, but the mission remains unchanged. And the battery that powers this powerful Thunder team still runs strong. There was a certain tightness, an incredible closeness between the Thunder’s young core and losing a key piece like Harden should obviously disturb some of that togetherness and chemistry. The hole left by Harden’s departure might be unfilled — Kevin Martin’s locker is well away from Harden’s old digs — but Scott Brooks has no choice but to move his team forward and focus on the goal. ‘James [Harden] was a good player,” Brooks said. ‘Don’t get me wrong. But he wasn’t Dr. James. He wasn’t helping the group stick together. All the guys do. Russell, Kevin, down the line, Perk, Nick. All the guys. That’s what makes good teams … I’ve never once went into a practice or a game thinking ‘Oh my gosh, I’m really worried about our chemistry tonight,’ Brooks said. ‘[Chemistry] was never a question. It really wasn’t. I think when you talk about chemistry with our group and if you question it, I don’t think you’ve been around our group as long as I have.’ Martin summarized his view of fitting in with the Thunder simply after his first practice: ‘Talent isn’t the problem, it’s just going to be chemistry.’ […] ‘You can’t duplicate it,’ Westbrook said of chemistry, ‘but we have a group of guys that have been here for a while. We’re switching the team up a little bit but every year we’ve had a different team and we’ve found a way to incorporate guys and make sure everybody knows what it takes for us to win. So I don’t think that’s going to be a problem.’”