OKC Thunder to Play the San Antonio Spurs on Christmas 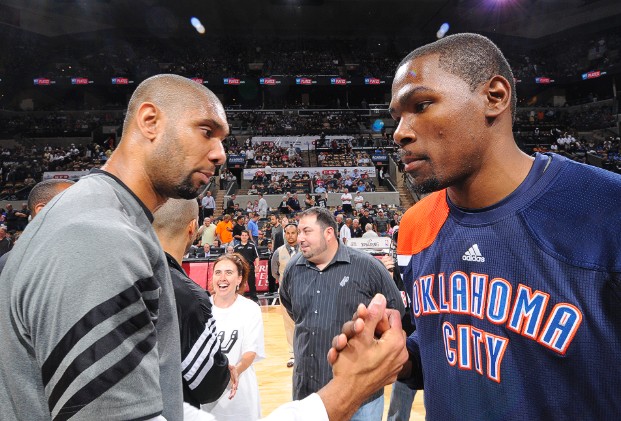 We already know about LeBron James and the Cleveland Cavaliers’ showdown with the Miami Heat. Another key Christmas day matchup is said to be the OKC Thunder vs the San Antonio Spurs. (The NBA will release the full regular season schedule tonight.) Per the Oklahoman:

The Oklahoma City Thunder will once again play a Christmas Day game this coming season, and for the third straight year that game will be played on the road.

It will be a rematch of the 2014 Western Conference Finals, as the Thunder travels to San Antonio to take on the defending NBA champion Spurs in a game scheduled for 2:30 p.m. Central on the biggest holiday of the NBA calendar.

The Thunder will open the season at Portland on Oct. 29, a Northwest Division matchup that offered the makings of a rivalry last season when Kevin Durant admitted to reporters that the two teams don’t like each other. The Trail Blazers went 54-28 last season and finished second in the division, five games behind the Thunder.