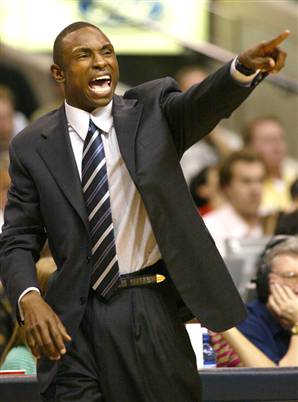 –Note: I feel the need to qualify this by saying that I think Avery Johnson is a great coach and I think he has a long, illustrious career with many championships ahead of him. But this is three games worth of collective frustration in watching the team that his system led to 67 wins. I’d just wish he’d take into account what others had to say.–

In the hours leading up to a night that could become infamous, we have come to this. A broken 67-win team facing its first true adversity is finding it impossible to regroup. The cracks are becoming more visible and the Dallas Mavericks are shattering seemingly overnight.

“I wasn’t the best of players and didn’t have the best skills, but you were not going to shake my confidence,” he told a group of reporters in the American Airlines Center this morning. “I’m tired of hearing about how they’ve taken him out of his game and any lack of confidence. You’re not supposed to have that, all right?”

In Johnson’s diatribe disguised as a press conference, the third-year coach never directly referenced Dirk Nowitzki, but backwardly referred to him incessantly. It reads as if he is starting a rumor.

This was more blind call-out than guided wake-up call; more confidence-rattling than motivation-stirring. Whatever you call it, it was completely ineffective.

Nowitzki has never been the outspoken type. It is well-documented that he tries almost too hard in postgame press conferences to never provide bulletin board material to the other team. It has become a detriment to his image and is the reason he was shaken earlier in the season when Dwyane Wade believed Nowitzki was continually slighting the Miami Heat in the media.

Nowitzki’s Monday post-practice comments — “I got to take what they give me and they don’t really give me a lot” — aren’t exactly fighting words. But Johnson should know by now that Nowitzki’s fight comes only on the court and never in the locker room.

Johnson, though, has opted instead to bicker and feign an attempt to rile up a team that has been outcoached as much as it has been outhustled in this series. Johnson has consistently ignored the calls from every member of the common media – both local and national, from Charles Barkley to Lang Whitaker – to play commonsensically. Instead of employing the rotation that won his team a decade-best 67 games and a Southwest Division Championship, the Mavericks coach went with a futile attempt to cater to Golden State’s tempo.

After four games and one win over a 40-loss team, Johnson is too stubborn, too pretentiously persistent to stray from his master plan. It is costing his team a legitimate chance at its first NBA Championship and shaming a budding franchise.

Mavericks any-other-day starting center Erick Dampier has played a combined four minutes in the previous two losses. With Dampier out of the lineup, Nowitzki is forced to uncomfortably slide over to the center position. This racks up quick fouls on Nowitzki. This does not allow him any room to operate in the paint, whereupon he is immediately collapsed and faces a helpside defender who would otherwise be sticking to another wide open seven-footer underneath the basket. This forces Nowitzki to become the primary rebounder. This allows Al Harrington, a bigger defender, to guard Nowitzki instead of Dampier, and moves 6’8” Stephen Jackson back to covering wing players like Josh Howard. This exaggerates the tempo of the game to a pace in which the more talented, but less athletic Mavericks cannot keep up. This disallows the use of the pick-and-roll and elbow game to which Nowitzki has become accustomed. This puts Dirk Nowitzki in places on the floor that he rarely saw in this year, his best season as a pro.

This, of all things, takes this year’s Most Valuable Player and makes him an average player. And Johnson’s last quote today insinuates that maybe he thinks Dirk is nothing better than that.

When asked if he doesn’t see the confidence in Nowitzki in shootaround, Johnson repeated this twice: “We’ll figure something out.”

So Avery Johnson might bench the league’s Most Valuable Player because he has proven woefully inadequate in finding a way to get him open?

And he should be showing that emotion towards you. You have failed to recognize a simple strategy, playing either Dampier DeSagana Diop almost all 48 minutes, that every NBA analyst in the country has noticed long before you. Even worse, you have recognized fully what every analyst an assistant coach has continually told you, but you are too tied to a gameplan to bother to change it.

It is, after all, this team, not Dirk Nowitzki alone, who has lost seven of its last eight playoff games. To thrust all this on a player that you have put in an almost impossible position to succeed is not a pep-talk. It is cowardice.

Do not take away from what is actually happening here, sir. No award gives you immunity and you need only to look at Mark Cuban’s previous business decisions to recognize that. An owner does not break up a 67-win team. An owner fires a coach who cannot win when it counts.

So tonight, when you watch your players take the floor for what could be the last time this season, go into it knowing this: it is not Dirk’s reputation that is on the line here.
It is your job.