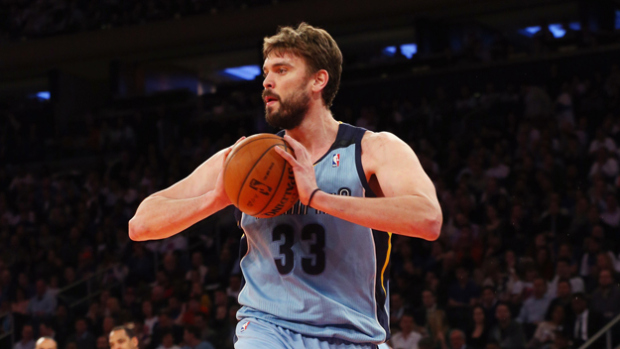 Next summer, the New York Knicks will have plenty of cap space, and are expected to be major players in the free agency market.

Grizzlies center Marc Gasol will be one of the most prized free agents, and his older brother Pau thinks there’s a chance the Knicks will convince him to relocate from Memphis to Gotham.

The elder Gasol says he turned New York down this past summer due to finances and their poorly-constructed roster.

Pau, in town with the Bulls, his new team, said it is “possible” his 29-year-old brother could wind up in New York and mentioned he has talked to Marc about Knicks president Phil Jackson in the past. […] “We’ll see what happens next year, what he decides. Hopefully he’ll have a strong year and all the options in the world, because he’s one of the top centers, interior players in the league, so any team would be fortunate to have him,” the 34-year-old Spaniard said of his younger brother, before the Bulls demolished the Knicks, 104-80, Wednesday night at the Garden. “It’s a personal decision. I talked to my brother enough about Phil that he knows what he brings to the table.

“I don’t know how much he’s involved in the team, really. He’s in an upstairs position, management position. He’s not on the court every day, so it’s something that [his brother will] consider when he gets to that point.”

“I considered them just because of different factors, mainly Phil and Derek being involved, the Knicks being a great organization as well,” Pau said. “It would’ve been interesting, but I thought there were better situations for me.” […] “Overall, I feel it’s a much more balanced team, with better weapons overall,” said Pau, a four-time All-Star. “I fit in better and it’s a team that’s automatically a contender.”