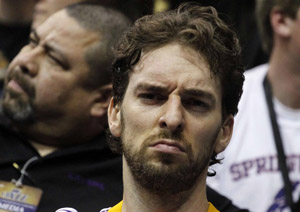 Generally speaking, the Thunder have spent the past few years with a reputation as a pretty reserved bunch. Yeah, there was the time Kevin Durant referred to Chris Bosh as a “fake tough guy,” but for the most part, these guys have played hard on the court and kept their mouths shut off it.

Enter Kendrick Perkins. In a recent interview with ESPN The Magazine, the newly acquired OKC center—who has spent plenty of time battling with the Lakers on and off the hardwood as a member of the Celtics—proved that he’s maintained some of those old beefs by speaking negatively about a few of the Los Angeles Lakers players, as well as their coach, Phil Jackson.

Naturally, Lakers center Pau Gasol is none too happy about it, and he put out a simple message to Perkins and friends: Pipe down. ESPN Los Angeles is on it:

Not only did Perkins bring veteran leadership and championship experience from his eight seasons with the Boston Celtics, he also brought a distinct disdain for the Lakers.

In an interview with ESPN The Magazine after the trade, Perkins said the Lakers were “yesterday’s news” and added, “I don’t like Pau Gasol or Phil Jackson. Phil is arrogant. Pau is soft. Kobe [Bryant] tries to bring out his toughness, but he’s still soft.”

Pau Gasol says “certain players talk too much from my perspective.”

After an extended practice Saturday, Gasol smiled and shook his head when he was relayed Perkins’ remarks.

“Certain players talk too much from my perspective,” he said. “They should worry about their own stuff.”

“You can’t control what other players do,” Gasol said. “It’s a tough opponent; we know that, they’ve gotten better. We want to beat them and if we can beat them up, even better. You got to have patience in life and the time will come to prove yourself and show what you got and what they got.”

Involvement in any sort of media back-and-forth is a (slightly) new look for the Oklahoma City, but who knows; maybe it’ll spark an intensity that’ll fire them up and help ’em compete with the occasionally intimidating reigning champs.

Oh, and at 9:30 p.m. EST tonight, the Lakers and Thunder will go at it on NBA TV. Just a heads up. Could be interesting.