Paul George: ‘If We Were in the Finals Tonight, I’d Be Ready for LeBron’ 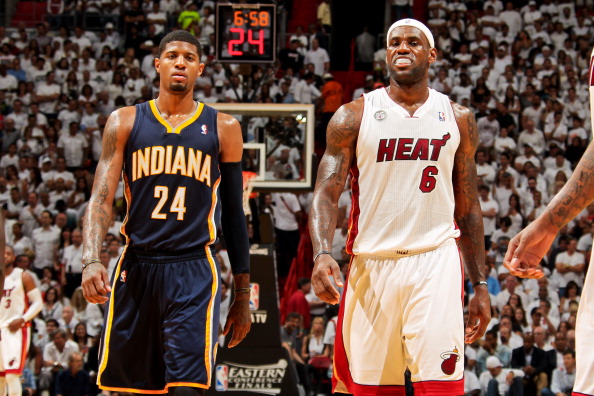 With all the great storylines from the 2014-15 NBA season, it’s easy to forget that pretty much the whole year, we were without Paul George, who a season prior was a serious MVP contender and had the Pacers challenging the Heat for supremacy in the Eastern Conference.

Now, almost a year removed from his horrific leg injury with Team USA, PG-13 says he’s feeling 100 percent, and he is chomping at the bit to get back on the court.

Recently, he even said he’d be ready to go right now if he were playing in the Finals against LeBron James. Or, as he corrected himself, the Warriors, since both he and James play in the East.

From Michael Marot of the Associated Press, via Yahoo! Sports:

A little more than 10 months after a horrific leg injury and just hours after impressing his coach with an hour-long workout, the Indiana Pacers’ two-time All-Star proclaimed he felt like his old self and was ready to face his biggest rival.

”I’m dunking on both legs, and if we were in the finals tonight, I’d be ready for LeBron,” George joked before the first pitch at the Caroline Symmes Celebrity Softball Challenge. ”I guess I should say I’d be ready for the (Golden State) Warriors.”

For George, it’s been a long road back from that ugly, unforgettable scene last August.

After running into a basketball stanchion and gruesomely snapping his right leg during a U.S. national team scrimmage, the budding NBA star was wheeled off the Las Vegas court on a stretcher. He missed 76 games before making his season debut April 5.

”He looks really good,” Vogel said. ”Obviously he was back and healthy enough to play last season, and now he’s taken another step. We’re encouraged with what he’s been able to do.”