Paul George Will Sign Extension With Pacers Before Season Begins 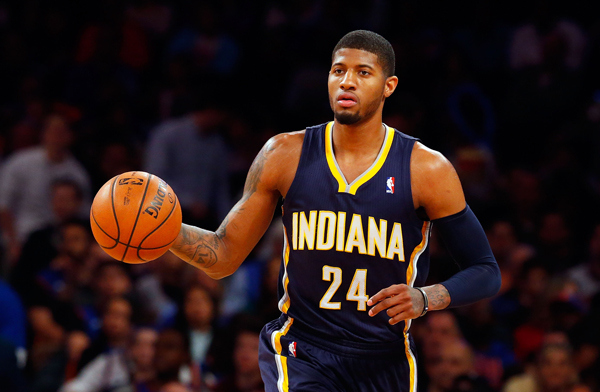 You can officially kill the Paul George-to-LA talks. George, currently scheduled to be a restricted free agent after the upcoming season, has no intentions of leaving Indiana. The news comes via the IndyStar:

“Indiana Pacers All-Star forward Paul George said today the team’s fans don’t need to worry about him going anywhere. Indianapolis is his professional home and he plans to be here for a long time. ‘(A long-term contract) is going to get done,’ George told The Indianapolis Star. ‘There will be a deal signed and sealed on the table before the season. We’re (George and Pacers management) on the same page.’ ‘No,’ George said when asked if there was any chance he would leave the Pacers. ‘Honestly, I love it here. I want to be here. It’s a great place. There are no distractions. I can stay focused. It’s all about basketball here. I can stay focused and do my job.’ Pacers President Larry Bird said earlier this week he hopes to reach a deal before the season because it would remove a potential distraction and give George a sense of security that many players crave — including Bird himself during his Hall of Fame career with the Boston Celtics. ‘We are working on it now,’ Bird said. ‘We’ve got a way set up where we definitely think we can get something done, but it’s going to have to work for both parties.’”