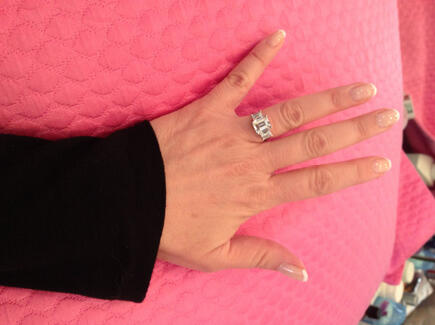 Los Angeles Lakers EVP Jeanie Buss might be the only person in the organization to get a ring this season — former Lakers head coach Phil Jackson asked his longtime companion for her hand in marriage over the Christmas holidays. Last night, Buss tweeted out a photo of the big rock she got from the Zen Master. Per the OC Register: “Phil Jackson wasn’t busy coaching the Lakers again on Christmas. Instead, he was proposing marriage to Jeanie Buss, daughter of Lakers owner Jerry Buss. Jeanie accepted — as she showed Thursday from her @JeanieBuss Twitter account with a photo of the diamond ring on her left ring finger and the statement: ‘Twitter family – Phil finally gave me that ring I wanted!’ Jeanie Buss, executive vice president of business operations for the Lakers, began dating Jackson right at the start of his first training camp as Lakers head coach in 1999. Buss, 51, had said often she never expected Jackson, married twice previously, to want to wed again. He came around, after all. The engagement makes even stranger the Lakers’ awkward coaching search in November, when Buss was crushed that her father and brother Jim decided along with Lakers general manager Mitch Kupchak that they’d rather hire Mike D’Antoni instead of waiting to determine if Jackson would’ve accepted a third go-around as Lakers head coach. So Jackson, 67, wasn’t coaching the Lakers against the Knicks on Christmas, but he was getting much closer to the Laker family. No wedding date has been set.”