The Philadelphia Sixers Met With Angry Fans About Tanking 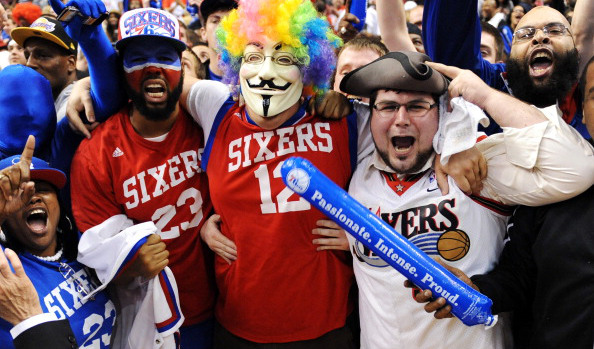 Philly has some of the most passionate, knowledgeable and brutally-honest fans in all of basketball. And for some reason, the Sixers’ braintrust thought it would be a good idea to hold a pow-wow with a few season ticket holders.

High-ranking members of the front-office sat through a brutal 40-minute session with paying customers last week, and answered difficult questions about their 0-14 calamity.

The Sixers haven’t been shy about their tanking plan — though, of course, they don’t call it that (not in public, anyway) — and continue to ask for patience from the restless fanbase.

The fan is polite, but smoldering. The subject — no surprise for a team that’s gone 10-36 at home the last 13 months — is season ticket prices. […] “A couple of years ago, you guys raised the prices when Andrew Bynum came here,” he tells the team’s chief executive officer. “And that didn’t work out. We paid for tickets, and then the [Jrue Holiday] trade happened. So we paid last year to watch nothing. And then this year, we bought tickets thinking we were gonna watch two lottery picks. The point is, we’re paying the same prices other people are paying … We’re paying what everybody is paying, and we’re watching three players out of 15 that would make [other] NBA teams.”

(CEO Scott O’Neil) had started this meeting with 17 disgruntled season ticket holders — 16 men and one woman — with a little joke. Rebuilding, he says, “has been a breeze.” […] “For you, not us,” comes the response from the crowd, loud, low and dead serious.