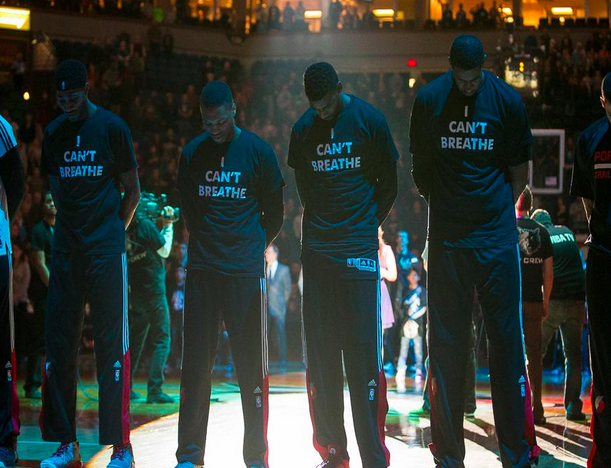 Led by All-Star point guard Damian Lillard prior to Wednesday night’s game against the Minnesota Timberwolves, the Portland Trail Blazers became the latest NBA team to protest the killing of Eric Garner by a cop.

Lillard, who is not one to shy away from voicing his opinion about controversial issues, wore the shirt during pregame warm-ups before the Blazers’ game against the Minnesota Timberwolves, in part, he says, because he has a “voice” that can prompt debate and, perhaps, even effect change. […] “It’s a stance on something outside of basketball that’s going on in the world today,” Lillard said.

“It hit home,” Lillard said. “Oakland is one of the main cities right now that’s protesting it and making a stand about it. It’s also one of the more recent things that actually got caught on camera, so I got to actually see it. I think when you can see something for yourself that makes you want to lobby for it even more. I think that’s why it’s ‘I Can’t Breathe,’ because that’s the video we saw. I feel like there’s something to be said about it.”

Lillard, who spoke earlier this season about being a role model and voicing opinions about controversial matters he feels strongly about, said he first thought about wearing an “I can’t breathe,” shirt earlier in the week. He reached out to team captain LaMarcus Aldridge to gauge his opinion and the two decided it was a good idea. […] Lillard had the shirts made by a friend, who had them mailed them to Minneapolis on Wednesday. Lillard said five shirts were made, and teammates Aldridge, Wesley Matthews, Will Barton and Dorell Wright joined him in wearing them before tipoff.