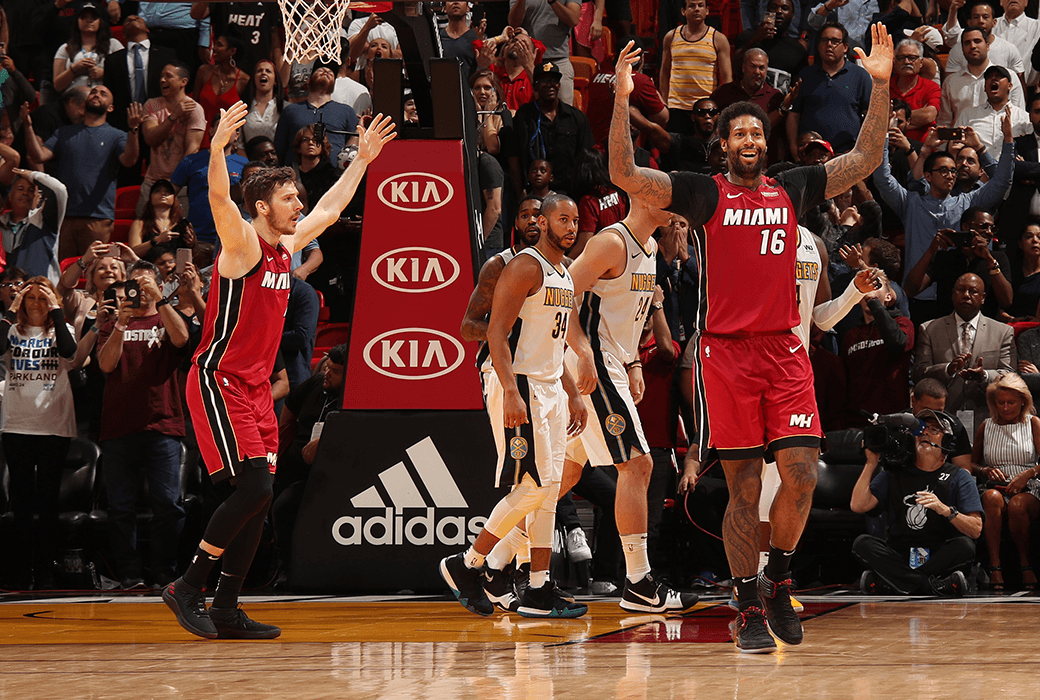 Kevin Love (18 points) got his first buckets since Jan. 28 as he returned from injury, but it was LeBron James who stole the show with his fourth triple-double of the month as he racked up 40 points, 12 rebounds and 10 assists on 16-for-29 shooting from the field.

Giannis Antetokounmpo had a team-high 37 points and 11 rebounds for Milwaukee. The Bucks would’ve taken 7th in the Eastern Conference from the Heat with a victory.

Quicken Loans Arena has been a fortress to the Bucks, who have dropped six games in-a-row in Cleveland.

And there it is: Kevin Love’s first bucket since Jan. 28 💪🏽 (via @nba) pic.twitter.com/HakEt3sl4F

The Lakers entered the night with eight wins in their last 12 and the momentum showed as they scored 37 in the first quarter; however, the Pacers won the middle two quarters 63-43 en route to a 10-point victory.

Kyle Kuzma led the Lakers with 27 points and Myles Turner dropped 21 for Indiana.

If the 76ers are playing, there’s a good chance that Joel Embiid is going to get more buckets than anyone else on the court. Embiid led all scorers for the fourth consecutive game as he dropped 25 points and grabbed 19 rebounds–Charlotte’s Kemba Walker was just one point short with 24.

The Hornets actually led by seven at the intermission, but a 32-14 third quarter run by the 76ers put the game to bed.

Perhaps the most peculiar stat of the night was Michael Kidd-Gilchrist’s plus-minus of minus-40 in 29 minutes of playing time despite the Hornets losing by just 14.  Newly acquired center Willy Hernangomez scored a season-high 17 for Charlotte with 15 of those points coming in the second quarter.

The Grizzlies couldn’t carry over any momentum from Saturday’s win over the Nuggets as Caris LeVert and Allen Crabbe each chipped in 22 points on a combined 14-for-19 shooting night from the field for the Nets.

Andrew Harrison made his return for Memphis after a nine-game absence due to a wrist injury and scored 14 second-half points.

The Knicks strung together back-to-back wins for the first time defeating the Suns and Nets on Jan. 26 and 30 as they blew out a short-handed Bulls squad.

Tim Hardaway Jr. scored a game-high 22 as New York outscored the Bulls in all four quarters.

The Bulls were without the services of its trio of young stars: Lauri Markkanen, Zach LaVine and Kris Dunn.

The game had major lottery implications as the win moved New York 1.5 games in behind of Chicago and the league’s eighth-worst record.

The Heat achieved the highest scoring game in franchise history as Kelly Olynyk and James Johnson combined for 61 points as Miami outlasted Denver in double-overtime. The duo also scored all 13 of the Heat’s points in the first overtime before Wayne Ellington hit a 3 to give Miami a lead it wouldn’t relinquish to open the second overtime.

Neither team was able to ever take a substantial lead the entire night as Denver led by one at the end of the first quarter, Miami led by one at halftime and the third quarter and the sides were tied at the conclusion of regulation and the first overtime period.

These 2017 draft class cats are something different 😅😅 (via @nba)
pic.twitter.com/jGOQrqyLKJ

The Spurs extended their win-streak to four games as LaMarcus Aldridge scored a game-high 33 points and grabbed 12 rebounds.

Already shorthanded without its trio of All-Stars Klay Thompson, Stephen Curry and Kevin Durant, Golden State’s rotation lost Draymond Green to a pelvic contusion after just 12 minutes. Despite the loss of Green, the Warriors still led by two entering the fourth quarter before Aldridge called his own number and went on an 11-0 that served as the catalyst for a 28-12 fourth quarter run for San Antonio.

G-League call-up Quinn Cook continued to shine for the Warriors as he had 20 points, five rebounds and five assists. Cook is averaging 24.3 points per game over his last three NBA contests.

The Pistons broke a frigid cold streak as Blake Griffin scored 26 points, grabbed nine boards and dished out seven assists. Griffin’s frontcourt mate, Andre Drummond, struggled to get opportunities on offense but grabbed a game-high 16 rebounds and had three blocks as Detroit outscored Sacramento by 16 in the second half.

Vince Carter scored seven points as he surpassed Patrick Ewing and moved up to 22nd on the NBA’s all-time scoring list.

Half man, half amazing and an icon since ‘98.

Congrats to Vinsanity for moving up to 22nd on the all-time scoring list. 🙌🏽🙌🏽🙌🏽 pic.twitter.com/uvKLSIovaX