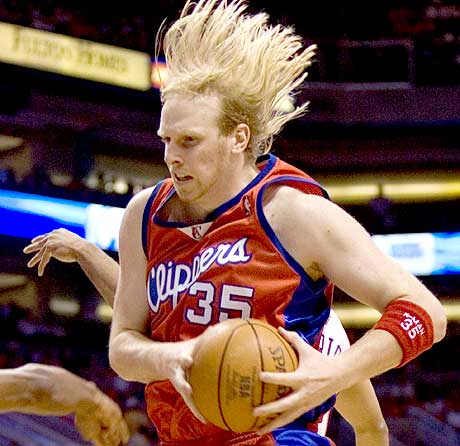 “The moment is here, take your f—– hood off and tell the driver to stay put.”

– And the iron goes to: The Clippers.

4/21: The unfathomable is happening. Think of the resurgent Clips as spring break. Elton Brand is behind the wheel; consistent and calm, he’s the only guy that can drive fast and safe with the madhouse in the backseat. You’ve got Sam Cassell riding shotgun. He’s been to Daytona before and, cocky shenanigans aside, his brain might as well be wired to Mapquest. He’s always talking about how incredible spring break is, and the rest of the crew was scared to go without him.

Chris Kaman sits in the backseat next to Cuttino Mobley and Corey Maggette, awkwardly distracted by the scenery and everything else that captures his imagination. Kaman probably won’t be getting any this spring break, but has worked on his game and really proven himself worthy of an Albino’s sunburn.

Maggette wasn’t sure if he was coming on spring break until a few weeks ago because he had the dreaded mid-semester mono, but he’s back and feeling better than ever. Mobley is the enigma of the group, but he seems into the trip, even though everybody in the car knows that for Cat to have fun they’re going to have to limit the amount of time he spends on his cell with his best friend, who recently moved to New York and is suffering from post-traumatic stress.

These five friends are being followed to Daytona by a car driven by Quentin Ross—he’s a great defensive driver. He’s riding with Vladamir Radmonivic, Shaun Livingston and Daniel Ewing. Livingston and Ewing are both stunned that their moms let them go on spring break.

The point of this trip is to have enough fun to feel like it should be a yearly occurrence, not to end up feeling like spring break is a waste of time, although they might not have much of a choice if Sam chooses ride with a different crew next year.

7/18: Their first trip to the postseason, all things considered, worked out well for the Clippers. Elton Brand solidified his reputation; Sam I Am proved that he is the x-factor…and he also re-upped, which is great for the franchise; Maggette “ma got he” some playoff experience (worst pun in recorded history); Mobley provided veteran leadership; Kaman wasn’t as serviceable in the two playoff rounds for the Clips as he was in the regular season because of matchups (the Suns) and because he wasn’t really all that important (Nuggets) — and, no, he didn’t get any.

Unfortunately, Daniel Ewing’s mom really shouldn’t have let him go on spring break, but I guess you could easily blame that on the chaperone (Dunleavy) for putting him in such an awkward situation. It reminded me of the time I got my fake I.D. taken in Daytona three weeks before my 21st birthday. The bouncer said I could pay him 40 bucks for it. Like Daniel Ewing’s premature search for his manhood (and Raja Bell), getting in just wasn’t worth it.

I can’t quite comment yet on the Tim Thomas signing, but I can tell you that tomorrow I’ll be joining the National Rifle Association. I just realized that the previous sentence could be horribly misconstrued. Allow me to clarify: I’m joining the NRA because I need to protect myself from the business savvy that is Tim Thomas. I really think Tim Thomas could walk up to me and be like, “Yo, what up man?” Minutes later, I’d get a notice from my local bank telling me that I’ve suddenly incurred a seven figure debt. In fact, I’ve decided to mirror my writing career after Thomas. That said, I will not be posting on Slamonline again. While I hold out for more money, I’ll appear on Hoop Magazine’s website—note: I said appear, not write for—and I’ll “appear” in the glossiest font imaginable. From there, I’ll show up on ESPN.com and lob mailbag jokes to Bill Simmons right as the NBA season is about to kick off, only to make a mid-season move to a blog that, normally renowned for its astounding crappiness, has suddenly gained surprising steam. Oh, and once I get there, you can bet your ass I’ll complain about my word count.)

“Hilarious move, you on some Curly, Moe, Larry sh*t.”
– And the iron goes to: Mrs. Kirilenko.

4/21: If fantasy basketball’s foremost statistical freak actually keeps his pizza limited to a single topping, there needs to be a televised country-wide search for the perfect groupie. The groupies could be judged based on statistical equivalents that mirror AK 47’s diverse numerical prowess. Groupies would need to learn how to block others from getting to Kirilenko, steal each others’ thunder, and show an ability to rebound from the obstacles thrown their way—sometimes staying defensive, sometimes getting offensive, sometimes using glass—and the final objective, obviously, would be to score; probably not that hard of a final obstacle considering the context. Whichever groupie accumulated the most impressive across-the-board stat line would get that special night and a lifetime supply of wifey jealousy, free of charge.

7/18: This still needs to happen. It would be the most incredible Russian sex-story Anna Kournikova moved on from hockey players to Enrique Iglesias.