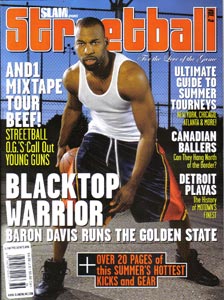 This would be a scene all too typical.

A couple of thousand Warriors fans, in those last few minutes of their bout with that seemingly unquenchable, 12-year playoff drought, bellowed their one last “LET’S GO WARRIORS” chant of the evening. Some others started their own – maybe something like “WE WANT DALLAS” – but it was muffled by the section’s buzz.

The clock dribbled off slowly and with it went this Golden State’s no-longer eternal misery. Players in the authentics pointed to their fans in their replicas. Confetti and streamers glistened so glaringly TV cameras couldn’t tell that the arena was half-empty already.

Half-empty because they were in Portland. Warriors fans wanted this night that badly.

And, as much as this is thrown around in sports nowadays, it’s worth risking the reputation: this team – this Golden State-Dallas series – can’t be typical. Not for a 1-8 matchup. Not even for a run-and-gun team. It’s not fair to the much of anyone.

Especially those fans. Most people don’t like their family enough to celebrate a life-altering event first-hand 10 hours away, nevermind non-ancestrally-binding tall people you see on TV 82 days a year (if you’re lucky).

Aunt Irene came out of that coma? Good for her! Twelve years, right? Try to pretend like nothing happened. Tell her you can’t wait for the Nagano Olympics to start. You want me to what? She lives in Portland. Portland! No.

Oh, Andrew finally set that World Clean & Jerk record? I know, he’s been trying for, what, 12 years? That’s fantastic, really. Oh, no, I can’t. I’m, uh, I’m going skiing. Yeah, can’t cancel. Yes, I know he has no fingers on either hand. I was there. Of course I “even know how to ski.” And my car battery died. But tell stumpy congrats!

Honey, is it official? I can’t believe the results took twelve whole years. Officially impotent! And we blamed all those technicals on Joey Crawford… No, I can’t come up to watch your team clinch. Ten hours. Maybe we should send Joey one of those “Hang in There” posters with the kitty on it.

Regardless, Warriors fans flocked north to where it’s still kind-of winter because they don’t know how playoff fans are supposed to act. They were driven by this flailing, bucking horse called Destiny. These are those storylines that would make it seem like this trip had a purpose — that they were on the first NBA 8-seed Championship bandwagon called Destiny before anyone else. (They need to stop naming all their s–t Destiny.)

Nellie/Cuban. Don Nelson and the team he built vs. Mark Cuban and the team Don Nelson built. You’ve heard of the Dirk Nowitzki-for-Robert “The Little Tractor that Could Launder $4 Million in Drug Money and Live in a” Traylor trade in almost every Mavericks telecast since the dawn of time (let’s say 2004). That was Nellie. So was the trade for Steve Nash, which ran them full-speed out of the cellar like a white girl in a horror movie. And so was the Juwan Howard-for-Nick Van Exel/Raef Lafrentz trade (which turned into Antoine Walker, Antawn Jamison which turned into Jason Terry, Jerry Stackhouse and Devin Harris). Nellie also marionetted Chris Mullin into pulling off that trade of the century over the winter: that one with the two homely white guys for the guy who wears a holster in the pleats of his shorts at practice and the guy with the nice teeth (can you tell I’m interviewing Al Harrington tomorrow?).

But Cuban will take some credit for the first couple and probably deservedly so, and that’s why they ended up in court at the end of Nellie’s contract. Nellie probably lost the suit when he tried to throw out all fast-talking lawyers who were 5’4” and under. (Rimshot!) They secretly respect-but-hate each other like divorced parents. Except Cuban ended up with full custody of the kid.

Which brings us to Nellie/Dirk. Nelson is responsible for any and all of the following in regards to Dirk Nowitzki:

But there are some — too many — accidental transgressions. He was better than Holger thought he could be. That time, the couple of losing seasons that allowed Dirk to grow up, allowed Dirk to fall into his own habits and forced Nellie to drink Bud Lights at postgame press conference like characters on the Surreal Life in the confession room. And it limited Dirk’s leadership capacities when Nash left.

And that’s why Nellie/Avery is really the only one of these storylines that matters. Avery showed Dirk that he could combine the aspects of the true center – the rebounding, the leadership abilities and, brand new to Dirk Nowitzkis everywhere this spring, passing in the paint and from the elbow – and still allow Dirk to be Dirk. Those things, even without a point guard, make him one of those era-defining players who can lead a team to a championship all by himself. That’s something neither Holger nor Nellie knew. It’s something that Nellie probably still doesn’t know.

So when this newfangled Golden State Warriors team with all of this California glitz and wins in eight of its last nine games and this somebody-call-Homeland-Security-we’ve-got-some-god-damn Communists offense runs into Dallas and pitches its circus tent, they’ll lay out their ammo.

All Warrior starters average over 15.5 points per. They all average over three assists per. Baron Davis – a good, finally healthy one — is on this team. 37% of the country on ESPN.com is picking them to defeat the Western Conference Champions in the first round. They’ve won five in a row against the Mavericks! If this small ball thing doesn’t work out, they have Andris Biedrins. Hey, that guy has a gun!

But it won’t be powerful enough because they choose not to remember or they just don’t know. Eight of nine is nothing compared to 67 of 82. This team should have won the Finals last year. Dirk Nowitzki, and not the one that Nellie knows, has to finish off his MVP season. There would be more to say, but regardless of the 1-8 misnomer, it is what it is.

Things we must discuss:
– I’ll be interviewing Al Harrington tomorrow night because he has a very, very proactive publicist. Almost as proactive as Lang’s. Anything you desperately need answered, email me or post below.

– Perusing the team message boards, dallasbasketball.com’s board has the best side bet going. One of their posters will rename themselves “StupidRetard” if the Warriors win two or more games in this series. I’d debate the redundancy there (what else, exactly, is said retard supposed to be?) but I like the bet so much. Tell me if you have anything better.

– I’ll be trying to get predictions from the fine folks at Golden State of Mind, Maverick Moneyball and Mike Fisher at dallasbasketball.com over the course of the day, so check back. Oh, and check out Cub’s Western Conference Wrap for someone who has managed to upstage us all the whole season.

– Also just found the winner for the Best Name for a Blog Oft-Related to this Series: Stephen Jackson’s Gunrack (via Deadspin).

I guess “I don’t own a gun, let alone many guns that would necessitate a rack. What is Stephen Jackson gonna do with a gun rack?.blogspot.com” is already taken.