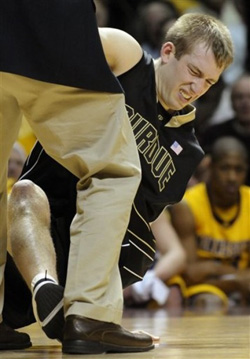 Purdue’s Robbie Hummel re-tore his ACL on the team’s first practice this morning and, according to the university, is done for the season.

Hummel suffered a season-ending ACL injury on February 24 this year and had just been cleared by doctors a week ago.

Only one word needs to be said to describe the situation: Terrible.

Purdue senior Robbie Hummel re-tore his ACL in practice Saturday morning and will miss the entire 2010-11 season, the university said.

Hummel missed the Boilermakers’ final eight games last season after tearing the ACL in his right knee the first time in a Feb. 24 game against Minnesota.

Before the injury, Hummel started all 27 games for Purdue, averaging 15.6 points, 6.9 rebounds and 2.1 assists per game. The forward earned All-Big Ten and honorable mention All-America honors.”

Purdue’s title hopes have essentially dwindled to nothing without its senior leader. With Hummel out, Duke’s out in front by a good margin to start the year.

Hummel, who also missed significant time his sophomore season with a back injury, could get a medical redshirt, but would he want to return without fellow Wooden Award candidates E’Twaun Moore and JaJuan Johnson?