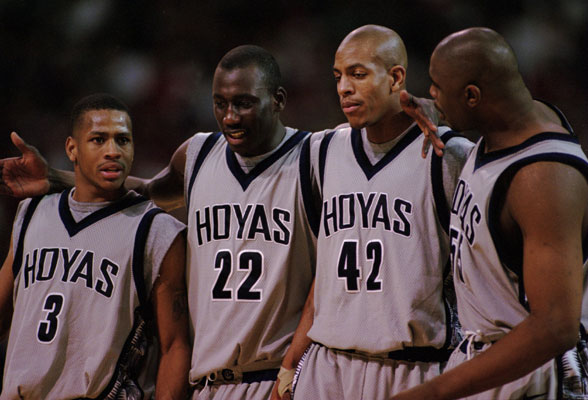 Between now and the Final Four, Erin Sharoni of Showtime’s “Jim Rome on Showtime” will be interviewing a handful of NCAA greats exclusively here at SLAMonline. Each player is featured on Thuzio, an online marketplace to connect the public with professional athletes for appearances, coaching, speaking and unique fan experiences. This week, Erin talks with Georgetown’s Junk Yard Dog, Jerome Williams.—Ed.

Jerome Williams: The Georgetown vs Weber State game. We were down 1 point with less than 10 seconds to go in the game. Don Reed and I battled for a defensive rebound, which he let me have. I passed the ball to Allen Iverson; Iverson dribbled down the length of the court, took a mid-range jump shot, missed the basket totally—an air ball. I was trailing the play, so I was right on his heels, and Don Reed was about five to 10 feet ahead of me. Don caught Iverson’s ball mid-air, with less than one second left, tossed in the layup, and we won the game. It was Georgetown pandemonium. We advanced to the Sweet 16, and Georgetown hadn’t been to the Sweet 16 in a few years. That was my junior year, the first year I had arrived on the Georgetown campus…it was my first real NCAA March Madness experience. They call it March Madness for a reason…everyone is playing at their top level and sometimes the big schools get knocked off. We played a great game and it came down to that last shot. That’s definitely one of my fondest NCAA memories.

SLAM: What was it like going from playing at a junior college to playing for a school like Georgetown, where basketball is such an important focal point of the campus culture?

JW: Well, I was a little older, so I was a little bit more prepared. I played at Montgomery County Junior College, where there was no one in the stands—20 to 30 people would be [considered] a packed house. By the time I got to Georgetown, it wasn’t much of an adjustment because I had had a lot of pressure on me in junior college, as I was their best player. I became used to that, “if I don’t do it, it’s not gonna happen,” type of feeling. When I got to Georgetown it was a relief because there were guys who were better than me—I got help, playing with guys like Allen Iverson, a future league MVP, probably a Hall of Famer, talent wise. It was just a great opportunity for me and I wanted to take full advantage of not only the basketball atmosphere, but of my education—that was huge. I was smiling and happy on all fronts. Yes, it did have a certain level of expectation, but I was glad that I was surrounded by guys like that.

SLAM: Did you have any pre-game rituals?

JW: My pre-game ritual was having my high-socks ready. In certain situations, they had to be created; I had to actually sometimes cut holes in the bottom of the socks to make them long enough, to make sure they came up right to my knees.

SLAM: How do you feel about the Big East Tournament and the impending changes due to conference realignment?

JW: It’s bittersweet because my memories of the Big East Tournament are not all the best, but I was there, I was a part of the history of it and a lot of other great players were too. To see it go away makes me sad, because that was my conference, that’s where I came from and that’s what I’ll always remember. I’ll always be part of it. When people look back 20, 30 years from now they’ll say, “That was the Big East conference, that is what it was…” It’s bittersweet; I’m going to miss it, but I’ll have to just cling on to whatever [conference] Georgetown goes to. I’ll always consider it the Big East.

SLAM: Do you still get excited for March Madness?

JW: I do. My level of excitement is always proportional to how well Georgetown is playing. Right now I’m very, very excited. I don’t get this excited very often, as every team has its cycles. Some years there isn’t even a chance, but this is one of those years that I feel is exciting because they have a good chance of getting to the Sweet 16 and beyond. [Playing with] the top 16 teams in the NCAA is a big deal. The Elite Eight are elite teams. They’re called “elite” for a reason. I was blessed enough to be on an elite team and I really value that now.

SLAM: Words of advice to Georgetown players this year?

JW: Cherish the moment. Play with passion. The one thing I can always look back on, is that when I played with Georgetown during the Tournament, I played with passion, and I know that I gave it my all—that’s what college basketball is all about. You don’t understand what’s coming ahead of you beyond the Tournament. There are no guarantees—this might be the last time you play, with this group of guys. It’s your team and it’s your school; there’s never going to be another opportunity like that. That’s what I would tell guys, that’s the difference in college and high school basketball. [Your teammates] will always be the same guys—if you’re blessed enough to play on any professional level, the guys turn over, they change. It’s not a culture, you’re not buying into the culture of an institution. You become part of the NBA brand or overseas league brand, and that brand is almost like its own entity. They operate under a different set of rules. With college, you choose—those guys chose to go to Georgetown, to go to Duke, Syracuse, UCAL, Arizona. They chose those schools. It’s different when you’re able to choose, versus when you get picked out of a hat, as the 26th pick of the first round of the NBA Draft, by the Detroit Pistons: I didn’t choose the Pistons, they chose me.

SLAM: Speaking to that point, how did playing in college compare to playing in the NBA?

JW: The difference is, you have to learn on the fly. You’re in a learning process of how to basically brand yourself and your image around the game of basketball, while playing at the highest level. That’s the short answer. You have to play at the highest level and be on top of your game, but on top of that, there’s a bigger picture: The NBA makes money off of brands. They market you, they put you out there, but they can only put out what you’re able to carry. I learned early on that I was able to carry the “Junkyard Dog” persona. The “junkyard dog” is who I was and what I was about, and the people that followed me were part of my “DoggPound”; they still are today. I learned that I was getting paid because they liked to watch me play and they were willing to go buy a jersey that represented the “Junkyard Dog.” What was that? I decided that my persona was going be about hard work and community service. That’s pretty much my life passion, along with the game of basketball. That’s the difference between college and the pros—you have to take what you learned in college and apply that to the [high] stakes in the NBA, and hope that your body holds up.

SLAM: You’re a featured Thuzio athlete. What’s the thuzio experience you’d most look forward to experiencing with a fan?

JW: Going to dinner with a fan—I’ve done it many times. I love going to dinner with fans because they get to ask the questions that they never thought they’d get to ask a professional athlete. It’s fun for me because they get to learn why they became my fan, why they bought my jersey. I also get something from it, too. I get to hear some of what they’ve read about me. It’s really cool to hear fans recount things that you don’t even remember…and then you get to tell them what happened beyond that. I just love those moments.

SLAM: Who was your favorite athlete growing up, and what is your dream fan experience, if you could create one?

JW: I’ve spent a lot of time with Magic Johnson, but never actually sat down and had dinner with him. I wore the Magic Johnson tennis shoes when I was a kid until I wore holes in the bottoms of them and even then, I still wore them. I think that he represents a lot beyond the game of basketball. He’s an inspiration to not only myself but to a lot of young athletes. He was the reason I even wanted to learn how to dribble: I’d always wanted to be a point guard; I was 6-2 and I thought that I could never be Magic. But I kept playing, and when the Lord blessed me with 7 more inches I thought, there’s still a chance! When I got to the NBA and coach Doug Collins told me, “Jerome, if you get the rebound, just go!” it was an awesome feeling. I didn’t get to quite develop Magic Johnson’s full repertoire, but I did get the opportunity from countless coaching Hall of Famers who told me that if i got the rebound, I could take off down the court like Magic. They trusted me enough, and I can’t ask for anything greater than that. If I had the opportunity, I’d want to sit down with Magic and have dinner.