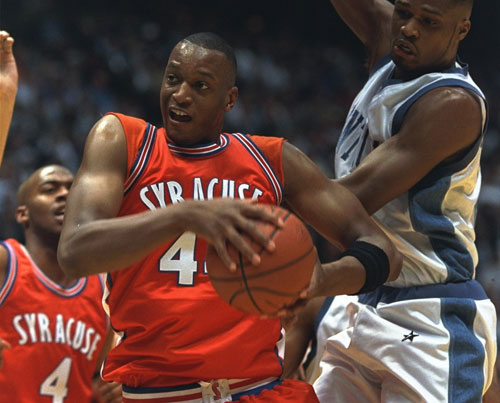 Between now and the Final Four, Erin Sharoni of Showtime’s Jim Rome on Showtime will be interviewing a handful of NCAA greats exclusively here at SLAMonline. Each player is featured on Thuzio, an online marketplace to connect the public with professional athletes for appearances, coaching, speaking and unique fan experiences. This week, Erin talks with Syracuse great John Wallace.—Ed.

John Wallace: We’re the most prominent college basketball team in New York State—we’re an internationally recognized school with a huge alumni following. We’ve pretty much always been a perennial powerhouse in college basketball, a powerhouse in lacrosse, and sometimes in football. We’re definitely New York’s college team and there’s no debate about it.

SLAM: How does your 1996 team stack up against this year’s team and past Syracuse teams like Carmelo Anthony’s?

JW: We stack up well against any team, pretty much. The one thing I’d say about my team and Melo’s team is that they both had a definitive go-to man; at the end of our games, myself or Melo knew that we’d get the shots because we were the go-to men. There were more definitive roles on our teams—that doesn’t necessarily mean you’re better, just more definitive roles—so at the end of the games when things got crucial, you knew what you were doing.

SLAM: What makes Jim Boeheim such a great coach?

JW: I love Boeheim. He’s the ultimate player’s coach. I don’t think he gets enough credit. It’s like the criticism of Phil Jackson sometimes—people think he won because of the talent [on his teams], but you definitely have to be a good coach to get all of those wins. Boeheim’s an incredible coach.

JW: Going to the Final Four—it’s just an incredible experience. Nothing can compare to it. Nothing else is like it.

SLAM: Did you have any pre-game rituals?

JW: I had a pre-game ritual of eating french toast with bacon or sausage, and there was a certain way I used to put my uniform and socks on. I guess a lot of people have their own key things that they do because that’s what equates to success in their minds—you’ll do anything to give yourself an advantage. I definitely stuck to my guns on everything I used to do.

SLAM: Do you have a bracket?

JW: No, I don’t do brackets. My bracket is Syracuse, every year. It’s a foregone conclusion. It happened once in my life…in 2003!

SLAM: Who poses the biggest threat to your Orangemen in this year’s Tournament?

JW: It’s going to take a really good team, having a really good day to beat us. But one team who when I watch, I think they could be hard to match up with, is Miami. [Shane] Larkin is playing great from the point. They have some wing guys that can really handle and shoot the ball—they have a lot of versatile guys so they have some guys that can shoot down the zone, so to speak. That’s the only team I can see with multiple shooters that can hurt us.

SLAM: What do you think about the demise of the Big East Tournament?

JW: It sucks that the Big East Tournament is basically no longer in existence. It sucks, it really does. There’s no other way to put it. I’m a New York kid so I came up on the Big East, never knew anything else.

SLAM: You’re a featured Thuzio athlete. What do you most look forward to experiencing with a fan?

JW: Any fan that would like to pick my brain—I’d like to let them ask questions until they were satisfied with the information they got. I’d like any Syracuse or New York Knicks fan to always be able to always have access to me, and for me to be able to get right back to them. Over the years I’ve learned by just hanging out with them at the games, that they just want to know the inside information. I’d like to be able to provide them with all of those inside scoops.

SLAM: Who was your favorite athlete growing up, and what was your dream fan experience?

JW: Muhammad Ali. I went to his training camp when I was about 5 years old, in Pennsylvania. I love him. I boxed for 8 years myself, and I loved him.