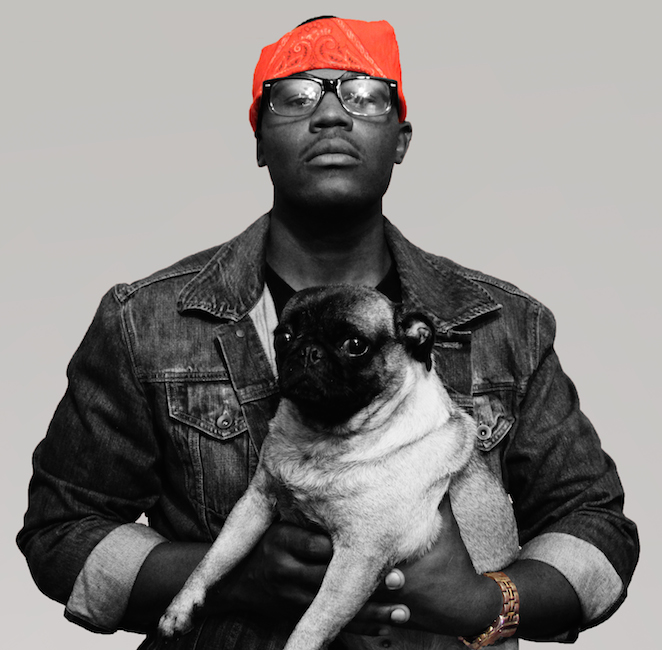 “I read SLAM on the regular when I was growing up,” says comedian Monroe Martin with a smile.

At the first glance of the 6-5 Martin, built like a power forward, you can’t help be a little intimidated, but his omnipresent smile and his gregarious laugh will put you at ease. He can smile and laugh now, but growing up in Philadelphia for Martin involved 14 different foster homes over the course of 15 years. In fact, his expert storytelling and ability to poke fun of how he grew up got him on the most recent season of NBC’s Last Comic Standing and as a New Face at the prestigious Just For Laughs festival in Montreal this past summer. Monroe is now a regular cast member on MTV2’s Guy Code and can be found headlining clubs across the country.

Before he headlined a show in Boston, the rising Martin, who now resides in New York City, took some time to talk to SLAM about his love for Jordans and how he used to party with former NBA player and current Temple assistant coach, Aaron McKie.

SLAM: At Just for Laughs in Montreal over the summer you were rocking the high-top Kobe 9s—a sneaker that’s hard to pull off but you did.

Monroe Martin: They are hard to pull off but the key is just keeping everything simple. It is all in how you lace them up, and the way the jeans sit on them. You have to keep it simple, don’t try to draw too much attention to ‘em. They speak for themselves, there is no need to do anything crazy with the rest of your outfit. Sometimes they look like wrestling boots, but they look like that if you don’t how to pull ‘em off. I bought the Kobe’s to kind of pat myself on the back for getting to Montreal. That was my third time auditioning and I finally got in. I got them to celebrate. My friend Nore Davis and I went sneaker shopping at this store called Exclucity. I knew exactly how I was going to wear them when I saw them on the wall.

SLAM: Is that your go to spot for kicks, Exclucity?

MM: Nah, it’s in Montreal. I bought them in Montreal for Just For Laughs. It was a benchmark for me, something that I worked hard for. Kobe is a great basketball player and a hard worker so they signify the hard work I put in to get to Montreal. I wanted to feel like I made it to the All-Star game.

SLAM: When you are on the road, do you always seek out sneaker spots?

MM: Yeah, when I go on the road I look for the hood sneaker spots. I buy a pair of sneakers that I was looking for and then will wear them when I perform in that city. Like when I was performing in Seattle, I bought the Sport Blue 14s. Then another time on the road I picked up a pair of Sport Blue 3s. I got the 1s another time.

SLAM: Oh, so you are a big Jordan head then?

MM: Yeah man, I got like 14 pairs. All of my friends keep asking why I’m buying so many sneakers but I pay them no mind. I look at each pair of sneakers as a reward, you know like I’m treating myself. I mean, this is the first time I’ve been headlining clubs.

SLAM: Right, that is because of Last Comic Standing right? How was that experience?

MM: I finished seventh but overall it was a great experience. I didn’t actually believe I was on the show because I thought I was going to get kicked off mad early. But the further and further I got, I was like Oh, okay this is happening. And then I got kicked off. [Laughs] But it was great. I learned a lot from the judges and the other comics. From that show, I’ve been able to travel and perform in places that I always wanted to.

SLAM: You grew up in Philadelphia—are you a Sixers fan?

MM: Of course, I love ‘em. I remember watching the 2001 NBA Finals outside on my boy’s porch on this lil’ ass TV, just going crazy for Allen Iverson and the rest of the team. Once that team broke up, I stopped paying attention to them for a bit but I still support my hometown team. One of my friends is related to Aaron Mckie so I used to see him at these house parties she would throw.

MM: He’s not, but she was his niece, so she would ask him to come through and he would. It wasn’t a house party like with kids drinking; it was more like a big barbeque with a lot of people and music. Everyone would only come to the party just to see him. We would be chilling, kinda pretending he’s not there and give him dap like he was a regular dude. But we knew. [Laughs]

SLAM: Besides McKie, there are a good number of great players that have come out of Philly. Kyle Lowry, Rasheed…

MM: Rasheed was my dude, man. He went to Gratz and I just wanted him to be great. Anybody that is from Philly and is able to make it to a bigger stage, the entire city wants them to be great. So we are always pulling for Sheed. I remember I used to have the Rasheed Wallace Air Force 1s. You remember those joints? With the strap? Those were dope shoes man. I used to wear them to high school and walk like a duck so they wouldn’t get wrinkled. [Laughs]