We caught up with the comedian to talk hoops, kicks, laughs and more. 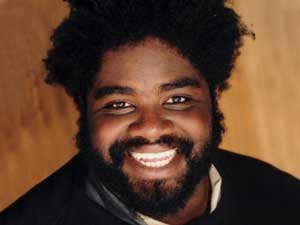 When you hear his self-described “sounding like an Asian princess” laugh, you also will laugh. You can’t help it. That’s just what comedian Ron Funches does. He is a one of a kind comedian whose unique jokes and affable sensibility landed him the role of Shelly on NBC’s Undateable.

Funches openly professes his love for wrestling in his act but he is also a passionate basketball fan. From growing up in Chicago to honing his comedic craft in Portland and now residing in Los Angeles, Funches has had the good fortune to have always lived in basketball fanatic cities. While performing at the Boston Comedy Festival, Funches took the time to talk with SLAM about hoops, comedy and his all-time favorite pair of sneakers.

SLAM: How did you become a fan of the NBA?

Ron Funches: I grew up in Chicago during the heyday of the Bulls. So I was all about Michael Jordan, Scottie Pippen, Bill Carthwright, John Paxson—my mom would always be like, “That’s my white boy.” Then her white boy became Steve Kerr. [Laughs]

I remember seeing House Party Two in the theaters, and the staff stopped the move and announced “The Bulls just won the finals again y’all!” I am a Bulls fan still to this day but growing up I also played a lot of NBA Jam, which made me like basketball a lot.

SLAM: Who was your team in NBA Jam? The Bulls?

RF: Yup, Chicago all day. Seattle was an amazing team as well. That duo of Gary Payton and Shawn Kemp was a lot of fun to play with.

SLAM: When you moved to Portland, did you automatically start rooting for the Blazers as well?

RF: No, not really. I mean I always had a hatred for Clyde Drexler.

SLAM: Why? Because of those early Finals with the Bulls and the Blazers?

RF: Maybe, but I remember seeing those stupid Drexler posters that said, “To air is human but to glyde is divine.” Also, I think he just looks like a high school janitor. Can’t you picture Drexler sweeping your high school hallway? I can’t respect that.

SLAM: So no love for the Blazers even though you lived there for a while?

RF: Portland is my second home, so the Blazers are my second favorite team. I like this Blazers team a lot with Damian Lillard and LaMarcus Aldridge. I loved that Jail Blazers team—they were my favorite Blazers of all time. The whole country was always up in arms, calling them out because they got caught with weed but if you live in Oregon, you know how good the weed is there. If you live in Portland, basically anyone can get caught with weed. It is going to happen.

SLAM: So kind of along that Jail Blazers line, what is something that a player has done that made you like them, made you become a fan of them?

RF: I really like Steve Nash. Not really for any real reason, it is just because I met Steve Nash. [Laughs]

SLAM: Where did you meet him?

RF: I met him at the Laugh Factory.

SLAM: Oh, he came to one of your shows?

RF: Yeah, he came out. He is friends with a guy who is married to one of the actresses on Undateable so they are always saying that he was going to come to a taping. That’s never happened, which is understandable because it is during the season. But this past offseason he came to one of my shows. I heard he is nice, but I didn’t really expect him to like my comedy because I kind of do weird stuff. After I was done with my set, he came right up to me and was like, “Oh man, you are so funny, you are so smart.” I loved it, he was acting like a big kid. So now, I’m like, Steve Nash is a cool dude. When I heard about how he hurt his back and now may be done playing, I was pretty bummed. But hey, get your money Steve Nash.

SLAM: As a comedian, what are your thoughts about Blake Griffin’s comedic talents?

RF: I think it is great. I’ve seen him come around to shows at the Laugh Factory and the Comedy Store. I like anybody who appreciates and supports other art forms. That is one reason why I like basketball. I can’t dunk on anybody, that is superhuman to me, so I have a real respect for it. I like it when players come to shows and show respect. You know, they don’t act like they can easily do what we are doing.

SLAM: You don’t get that from Blake?

RF: No, not at all. From to the shows he goes to, you can tell he just really likes comedy. He truly likes comedy, and I got a lot of respect for that.

SLAM: That’s cool to hear. Let’s talk a bit about Undateable. I heard that your fellow cast member, Rick Glassman, actually played against LeBron James in high school. Does he bring that up a lot?

RF: He brings it up all time. I mean all the time. My favorite story of his, he will probably want to tell you himself, but I’m still going to tell you. [Laughs] Once Rick went to a Cavs game and waited in line to get an autograph from LeBron. It is like him, bunch of lil’ kids and screaming girls. LeBron stops by and Rick goes, “Hey, I used to play against you in high school.” LeBron responded by saying, “Good for you.” [Laughs] That kind of sounds like a jerk thing to say, but I probably would have said the same thing.

SLAM: Amazing. So do you guys talk a lot of ball on set?

RF: Yeah, we talk a lot of ball. We actually get Clippers tickets from time to time so we always fight to see who gets them. A lot of them play. too—they are champs of their league, whatever that means. I don’t play in it.

SLAM: Do you play at all?

RF: Nah, I try a little here and there. But if you want to play full court, no thank you.

SLAM: Not sure if you heard about this, but the majority owner of the Sacramento Kings pitched a radical idea to his team, play four on five, so one player is always cherry picking. Let’s say that you are on a team that is using this strategy. Who are the four other NBA players you would want to be on your team? All you have to do is catch the ball and make a layup.

RF: OK, first of all we are still going to lose.The other players are going to be quick enough to come back and block me because even though I got a head start, I will be on my third time attempting a layup. But on my team, I will have Derrick Rose. He seems real cool. I that Kanye song, where he goes, “Shout out to Derrick Rose, man that nigga nice.” It always makes me think that Kanye is saying that Rose is just an extremely nice guy. Kanye is all like, “He met my wife and is real kind to her.” [Laughs] Besides Rose, I would have Kevin Love—I used to see him play in high school at Lake Oswego. Then Blake Griffin, who is real cool, and Steve Nash. I know Nash is probably done playing and we already have a point guard but he would probably do something cool on the court like kick a pass to me.

SLAM: Solid team. I know you also a big sneakerhead. What is your favorite shoe that you own?

RF: I’ve never been caught up in Jordans. I couldn’t afford them as a kid and now as an adult, I can get them but they just look weird on my feet. My all-time favorite shoes are a pair of Kevin Johnsons I had as a kid.

SLAM: Yeah? Those Cons with the React juice in them?

RF: Yeah, I loved those shoes. I liked how the shoe looked, and I loved his commercial. I wanted the Larry Johnson Grandmamas but they were too expensive.