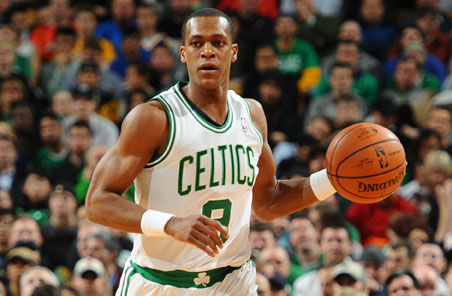 Celtics point guard Rajon Rondo underwent surgery on Friday morning to repair a broken finger on his left hand, and could miss 6-8 weeks. Rondo reportedly suffered the injury in a fall at his home (in the shower?) on Thursday night. Per the Boston Globe:

Rondo’s health has taken another step back after the team announced the four-time All-Star and team captain had surgery Friday morning to repair a broken bone in his left hand.

The 28-year-old suffered the injury — a left metacarpal fracture — during a fall in his home Thursday night, the team stated in a release.

Doctors estimate that Rondo could miss 6-8 weeks, meaning he will be sidelined for at least the start of the regular season, which the Celtics open Oct. 29 against Brooklyn at TD Garden. If Rondo is out eight weeks, he could miss nearly the first full month of the season.