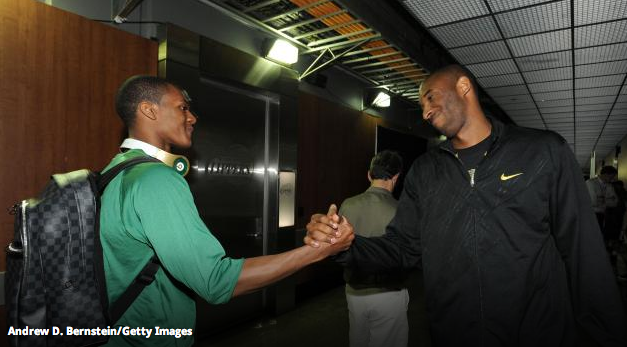 Kobe Bryant has made it abundantly clear that he’ll heavily recruit Rajon Rondo this summer when the point guard becomes an unrestricted free agent, but it’s no slam dunk.

Despite the rumors and tough adjustment to his new playing environment, Rondo says there’s no reason he’d want to leave the Dallas Mavericks.

Rondo is flattered that Kobe so desperately wants him as a Los Angeles Lakers teammate.

The two competitors and close friends apparently scheduled to have breakfast again. But then Lakers guard Kobe Bryant stood up Mavericks guard Rajon Rondo. […] “A–hole,” Rondo joked, referring to the nickname they have for each other.

“I stay in touch with him. I stay in touch with some other guys, too,” Bryant said, though he said the two did not interact before, during or after the Lakers’ 100-93 loss to Dallas on Sunday at Staples Center. “I’ll look around and talk with management. We’ll look at what we can do and should do. Hopefully we’ll then have a more competitive team.”

“When he speaks, it speaks volumes,” Rondo said of Bryant. “It’s an honor and compliment he’d want to play with a guy like me. But right now I’m focused on winning a championship with the Dallas Mavericks.” […] “It’s impossible to play with Kobe right now,” Rondo said. “I’m focused on playing with Dirk (Nowitzki), Monte (Ellis), Tyson (Chandler), J.J. Bare and playing for Rick Carlisle. That’s my team right now.”