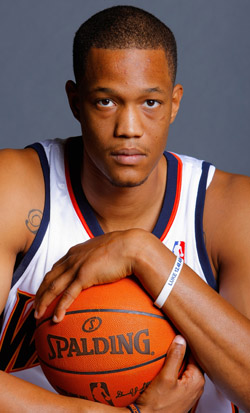 With all of the noise surrounding Stephen Jackson’s situation in Golden State, every other story about the team has gotten drowned out.

Case in point, yesterday, without much fanfare, the Warriors announced that they’ve exercised team options for the 2010-11 season on both Anthony Randolph and Brandon Wright.

As the Mercury News reports:

Under the terms of the NBA’s current collective bargaining agreement, the first two years of a first round draft pick’s contract are guaranteed, while the third and fourth year of the contract are the team’s option. Wright was selected with the eighth overall selection in the 2007 draft by the Charlotte Bobcats and later acquired by Golden State, while Randolph was selected by the Warriors with the 14th pick in the 2008 draft.

Wright, 22, hasn’t done much in his career yet, and will miss much of the upcoming season with a shoulder injury. Randolph, 20, showed glimpses of what he can he bring to the table in Summer League, where he scored and rebounded at will, and hopes to get the opportunity to do the same in the regular season.

While the deals mean extra spending money for the duo, it also means that they’re stuck in Golden State at least for this season and next. And while that’s better than being locked up, with all the bad press, losing and negativity, it’s the current version of an NBA prison sentence—much like the Clippers used to be.