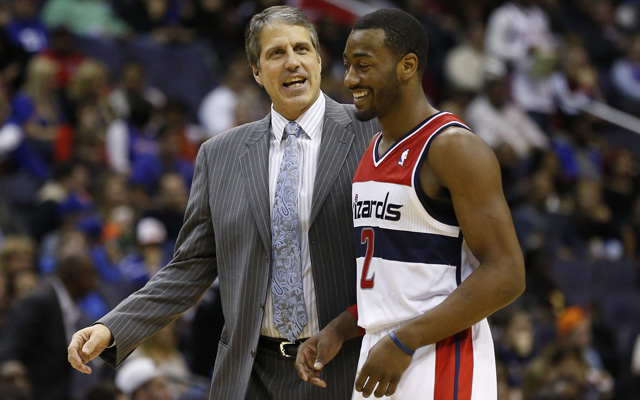 Wittman is reluctant to join the analytics movement in hoops, and seems married to his old-school methods.

Last season, the Wizards were among the L’s leaders in midrange jumpers attempted – the bane of NBA wonks’ existence – but have made getting to the charity stripe a focus of their offensive attack.

Washington’s tendency to settle for jumpers also produced fewer drives to the basket and, subsequently, trips to the free throw line in 2013-14. Washington shot 47.3 percent last season on drives — defined as a touch that starts at least 20 feet from the hoop and is dribbled within 10 feet of the goal excluding fast breaks — which ranked seventh in the NBA. But the Wizards averaged just 16.5 drives per game (28th) and 18.2 points per game on drives (29th). […] Furthermore, the Wizards averaged 20.9 free throws per game, the fifth-lowest mark in the league. The Wizards made getting to the free throw line a point of emphasis during the preseason. In eight exhibition contests, the Wizards attempted 238 free throws, seventh most in the league, and converted 72.3 percent.

“What leads to that is when you have good ball movement,” Wittman said after practice Monday. “That’s when you get the close-outs and the ability to put the ball on the floor and get to it. So it’s a byproduct, I think, of how we want to play, in terms of getting the ball swung from side to side and getting the defense to move and attacking the close-out to the rim. […] That’s something we’ve got to keep doing because that’s one of our goals that we want to get better at. I didn’t think we got to the line enough as a team last year and that’s been a positive.”