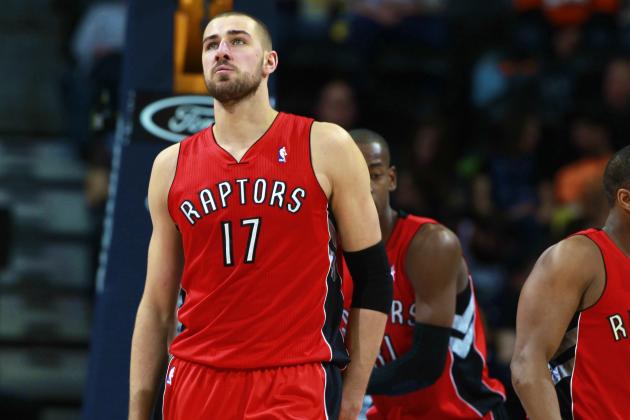 Third-year center Jonas Valanciunas is expected to improve by a wide margin this season — the Toronto Raptors want the 22-year old to transform himself into the NBA’s top rim protector.

It certainly won’t be easy.

Amir Johnson is considered the team’s best interior help defender, but the Raptors’ coaching staff is counting big on Jonas.

“One of the big focuses for us to advance in the playoffs is that he’s got to be the best rim protector — block shots, [legal] vertical [jumps] and being able to get over to that weak side early on any [dribble] penetration,” said Bill Bayno, the Raptors assistant coach who has worked extensively with Valanciunas. “At times he was great at it last year. … But we want it every night, 82 games.”

“Best in the league,” Bayno clarifies. “We want him to be No. 1 in the NBA. We want that as a goal. Right now, [Pacers centre Roy] Hibbert is the best. We want him chasing Hibbert. If he comes up a little short, hopefully he’s going to be elite, one of the top five in the league.”

The best way to get better in that role is by playing five-on-five basketball, but Valanciunas’s time with the Lithuanian national team was nearly meaningless in that regard. There is no such thing as a defensive three seconds in the key violation in international basketball. […] “You just stand in the middle and cover the ground. If your guy is not shooting from the outside, you can just sit inside the paint and be the shot-blocker,” Valanciunas said. “It’s harder to be on a rotation [in the NBA]. It’s harder to stay in the middle and just wait out guys.”