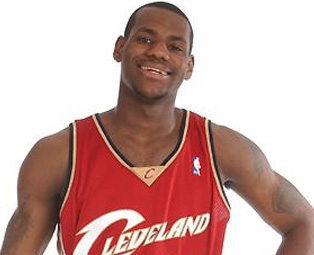 Our man Clement Chu went to check the Raptors/Cavs preseason game, and he filed these notes…
When I arrived at the ACC yesterday, the first thing I wanted to see was the Raptors newly renovated dressing room. So much has been made about how Colangelo wanted the whole place to be changed to create a new environment. As luck would have it, there was a big “Under Renovation” sign as I entered. The locker room is FAR from being finished. A few things I noticed though:
— It’s a lot brighter than before.

— Mo Pete, Bosh, T.J. Ford and Darrick Martin (the floor leaders for the Raps) are now all placed beside each other on the near side, close to the entrance. It’s interesting because in the past, the team’s leadership always seemed to be spread around the room with vets placed next to rookies — doesn’t seem to be the case now.

Other changes? Well, if you’ve played NBA Live 07 or 2K7, you’ll already know that the Raps have replaced the Barney in the middle of the court with the Claw logo. The game-ops people have added a drumline to hammer out beats during timeouts and a group of break dancers to pop-and-lock to your heart’s delight. This is interesting because in the past, the Raptors were against anything really “urban” as part of their entertainment. Rumor has it that Jigga himself once offered to perform at halftime during the Vince Carter era but was denied.

So the Cavs were in town to take on the undefeated (pre-season) Raps who were rolling without Andrea Bargnani, CB4 and T.J. Ford (misc. bootleg injuries). Kris Humphries and Jose Calderon got the nod for starting assignments.

The Cavs decided to unleash LeBron after not dressing him in their previous Raptors match-up last Wednesday. He looked especially bouncy, having a pseudo-dunk contest with Drew Gooden during warm-ups where on one run-in from the left, he spun, double clutched an elbow jumpshot, then fired the ball directly at the side of the square and tried to finish off the glass with his right hand.

I was thinking to myself that if the Raps got their first loss of this pre-season, it would be totally excusable. With two of their main guys out, having to endure “Fanfest” earlier in the day (an open practice for the fans with giveaways and stuff), and the Cavs playing at full strength, it wouldn’t have been surprising to see them cough this one up.

So what happened during the game?

In the first quarter, Kris Humphries was keeping the Raps in it with his hustle. With 6:44 left in the 1st, he caught the ball on the right wing and took two big dribbles with his left and finished with two hands in traffic, making Colangelo look like a genius for making the trade to get him.

LeBron is just TOO sick; 5:43 left in the 1st, LeBron busts out on the break dribbling with his right, crosses Jorge Garbajosa over, takes a bump, gets the whistle and puts it up to the hoop finishing with ease. And yes, I know all of us have seen this type of play from him over and over on SportsCenter, but to see it live and in person is quite a thing to behold.
This drumline thing is not working for me. They’re trying to drum along to the chants of “defense” but the problem is there is a delay in the sound due to the acoustics of the arena and it throws the whole thing off. The same thing happened to my friend who sang the national anthem at the ACC. She didn’t realize the delay was so long so she kept waiting for her voice to come on over the speaker system before she sang the next verse as opposed to just continuing. Needless to say, it was the longest rendition of the Star Spangled Banner ever…

Samuel (Latrell) Jackson (who is in town filming the sci-fi movie “Jumper”) was sitting in the first row with CB4s mom. I swear, I think Jackson is following me around; after hearing about him making an appearance at the Sneaker Pimps show early Friday evening, I caught him standing behind me at the DJ Jazzy Jeff show later that evening at Guvernment.

With 5:37 left in the half LeBron once again shows the sickness: After defending Anthony Parker and stealing the ball from him, LeBron headed upcourt with Parker draped on his left shoulder. He then gave Parker a little love tap at the 3-point line, drew the foul, took one more step and finished with his patented one-handed tomahawk.

Something weird happened as the 3rd quarter was coming to an end: With about 2:20 left, Damon Jones caught a pass in front of the Raptors bench and it looked like Darrick Martin said something to him as he took the shot. After Jones hit the shot, he slapped his backside and yelled something at the bench which I’m assuming has something to do with kissing something. Martin then got into the game a few plays later and with 36 seconds remaining, hit a 3 on Jones. Following the shot, he ran right up to Jones and started talking and launched into some sort of animated dance. Earlier in the season when Darrick told me he was the biggest trash talker on the team, I doubted him. Well, I guess he showed me…

Down the stretch, thanks to some hustle plays and a Sasha Pavlovic missed free throw, the Raptors pulled out a 91-90 win. LeBron didn’t even finish the game, instead giving the playmaking duties to Shannon Brown. And I have to say, although Shannon didn’t really play that much, you can see he has top-notch athleticism and will one day be a great NBA player.

In the locker room afterwards, Kris Humphries was getting bum rushed by the media thanks to his 16-point, 9 rebound performance. When the scrum mobbed Bosh, T.J. let out a comment: “Now that’s celebrity status…you don’t even play and still get all the [media].”

It appears that Jose Calderon has added some ink over the summer. On his lower back are 4 Asian characters running vertically which, if I were Asian, I could translate for you. But seeing as how I am obviously not, I will have to ask Jose next time what it means.