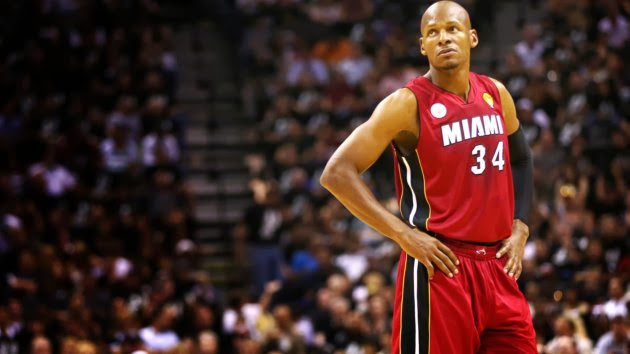 Ray Allen might still be the top three-point artist we have in the L, but he’s a cool 38-years old, and so retiring figures to be at least a possibility every offseason from here on. He didn’t reject the idea when speaking with the media after Thursday’s Game 4 loss. From the BostonGlobe.com:

“I guess everything [is factored into the decision],” he said Thursday before the Heat lost to the Spurs, 107-86, in Game 4 of the NBA Finals. “You get away from it, you sit down and get an opportunity to think about it. It depends on how my body feels. I love the condition I’ve been in over the last couple of years. It’s just a natural progression.”

“I don’t look at this as an age thing for me, it’s never been an age thing,” said Allen, who was averaging 9.6 points in the playoffs entering Game 4. “I always laugh because I see the birthdates of the some of the younger guys. They’re born in the ’90s. In the ’90s! I was kicking it hard in the ’90s.”