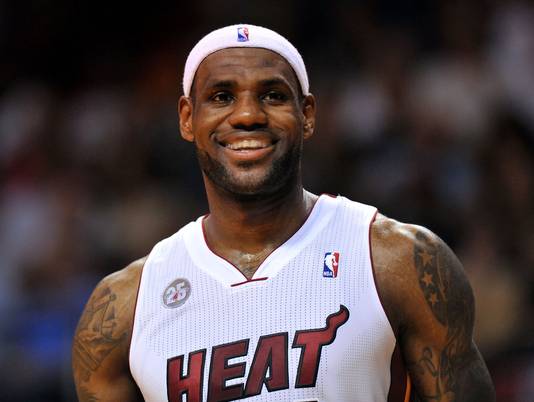 There is a big, nationally-televised game between the Miami Heat and Brooklyn Nets set to take place tonight. Even LeBron James is pumped — he’s looking forward to playing in BK, and called out the Nets for quitting on their former coach.

Nets forward Reggie Evans added fuel to the fire today when speaking to reporters, claiming that the Heat’s title last year was tainted due to the fact that it happened during a lockout-shortened year. Evans also said that Brooklyn would shut down LeBron tonight (Reggie’s much wiser teammate, Gerald Wallace, steered clear of the war of words.)

The Heat is just another team and LeBron is just another player to Reggie Evans, who indicated Miami’s title run last season is diminished because the schedule was shortened. “It doesn’t prove nothing,” Evans said when asked what it would mean to beat the defending champs. “That was a lockout season.” […] “Our team is defending the Miami Heat. If our team has to defend one person, LeBron isn’t going to score nothing. …LeBron is no different from Joe Johnson or Andray Blatche. No different,” Brooklyn’s starting power forward said. “People need help (on defense). Some people don’t need help. Everybody has to be double-teamed, it doesn’t matter who you are. You just have to stop LeBron in transition. He’s quick in transition. If you look at Joe Johnson — Joe Johnson has two or three people trying to stop him. Whoever is guarding him.”

Gerald Wallace, who is likely to guard James tonight at the Barclays Center, wasn’t interested in discussing the match up. “No comment,” the forward said.

Phil Jackson used to needle the San Antonio Spurs about winning a championship in 1999, infamously placing an asterisk on their title during that 50-game season. But he’s Phil Jackson; this is Reggie Evans.

The Brooklyn Nets’ talkative, bearded forward might want to consider getting out of the way if he sees LeBron James charging down the lane tonight.