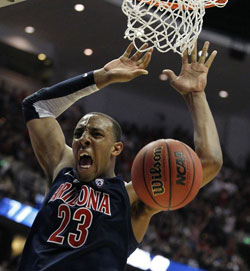 Thanks to the luck of the lottery, the Cleveland Cavaliers have the luxury of two top-five picks in this year’s draft. But they’re looking to get richer, according to ESPN’s Chris Broussard via Twitter:

Cavs, Pistons, Twolves discussing 3-team trade that would give Cavs 1st & 2nd picks, sources say.  Cavs absorb Rip Hamilton into 14.6 mill trade exception & get Det’s 8th pick. Cavs send 4th & 8th picks to Minny for 2nd pick.  Cavs would then draft Kyrie No. 1 and Derrick Williams No. 2. Nothing imminent but trade us being discussed by the teams.

Minnesota is open to moving down in the draft. Derrick Williams is considered the second-best player available after Kyrie Irving and the T-Wolves already have Michael Beasley and Wesley Johnson at small forward. Meanwhile, the Cavaliers are trying to rid themselves of the bad taste left by LeBron James’ departure. Drafting the two prospects with the highest likelihood of stardom would bring even more hope back to Cleveland. But for the Pistons, is the eighth pick worth giving up just to shed salary?