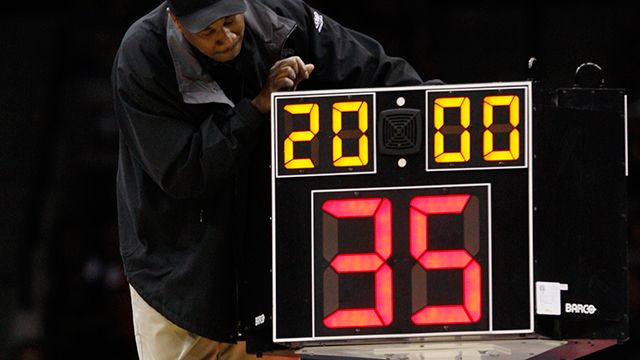 If you think men’s college basketball games are slow and boring, we have some good news. According to ESPN’s Andy Katz, college hoops is reportedly “likely” moving towards adopting a 30-second shot clock. The sport has had a 35-second shot clock since the 1993-94 season, and this year, the NCAA experimented with a truncated shot clock during the NIT, CBI and CIT postseason tournaments for the men’s game. The NCAA rules committee will vote on the matter when it convenes in May.

Men’s basketball is likely heading toward reducing its shot clock from 35 to 30 seconds, the chair of the NCAA rules committee told ESPN.com on Monday.

Belmont coach Rick Byrd said a year ago the chances were 95 percent against change, but changed his tone Monday.

“Now there’s a real decent chance,” Byrd said. “It’s pretty evident a lot more coaches are leaning that way. The opinion of coaches on the shot clock have moved significantly to reducing it from 35 to 30. And all indicators are pointing toward that.”

The rules committee will meet May 12-15 in Indianapolis and review all the data and surveys on the matter from this past season. The NIT, CBI and CIT postseason tournaments all experimented with the 30-second shot clock this past March. The rules committee can change rules every odd year.

“I think it’s fair to say the buzz about the game is that scoring in the 50s can be ugly,” Byrd said. “There’s a lot of talk about it — more coverage than ever before. All of that has created acceptance from the coaches side.”

Byrd said coaches, fans and media are expecting the rules committee to do something that impacts scoring.

“There’s not a lot we can do unless we rewrite the rules,” he said. “There will be pressure to do something, and one of those things to do is to lower the shot clock to 30. I think that would improve the pace of play.”