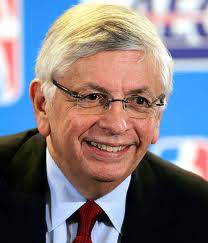 If you’ve been carefully following the ups and downs of the NBA lockout, chances are that by now you’re stuck with a pretty dreadful headache. Every time it feels like “progress” is taking place, that progress subsequently implodes and the two sides move even further apart. The latest example of this was earlier in the week, after Thursday night’s NBA/NBPA meeting ended, when federal mediator George Cohen—perhaps the best mediator of negotiations in, I don’t know, the entire world—removed himself from the proceedings, saying he has “no useful purpose to continue.” Great.

All of this sounds awfully negative, until you read this: David Stern is reportedly telling his ESPN and TNT television partners that an 82-game season can still be salvaged.

While two weeks of the regular season have already been canceled and at least two more are expected to go soon, two sources close to the negotiations said the union believes that Stern assured his ESPN and TNT television partners that, by back-ending the missed games, he can still deliver an 82-game season even if starts in December. Accurate or not, the players’ perception of when their early paychecks will truly be gone for good will determine when they reach for the panic button.

For another minuscule glimmer of hope, the NY Times is reporting that a phone call or two between the NBA and NBPA may take place over the weekend, and that meetings will likely resume once again next week:

Yet on Friday, people on both sides of the divide, speaking off the record, predicted there would be a phone call or two over the weekend and probably another meeting next week. That has been the pattern all month: every dramatic breakdown followed by a brief silence and then a surprising resumption of talks.

Just about everyone reporting on the matter is expecting another round of game cancellations this coming week, so don’t be surprised if/when that takes place, but if you can, you might as well muster up the strength to remain hopeful. At this point, what else can you do?